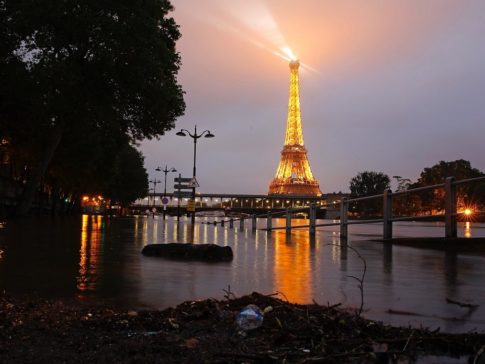 François Duquesne, head of Vigicrues, the agency which monitors water levels in France, said: “The Seine is still rising but we are far from the 8.5 metres recorded in 1910. We should see a rise to a peak of around 5.6 metres overnight.”

The flooding started after heavy rain led the River Seine to rise above its “preliminary” alert level of 5 metres on Thursday (local time).

The Seine floods the French capital on average once a century. The last time it occurred was in 1910 when large areas of the capital were flooded for 45 days.

Local weather forecasts suggest that the weather should improve over the weekend.

Here’s a look at the extent of the current flooding:

Eight days until the Euros kick off… parts of Paris under water. pic.twitter.com/t1Ldl7e10C

excuse me, this is the only photo of the paris flooding you need to see pic.twitter.com/HI3467ngwq

Paris is flooding. But this pic from the 1924 Seine flood cannot be topped. pic.twitter.com/pRQ4PuVQUz