No, this is not from The Onion.

In an apparent attempt to make math more relevant to the young people of Alabama, a teacher at Burns Middle School in Mobile, required eighth-graders to take a math quiz that drew complaints from parents about inappropriate themes and racist overtones.

As The Washington Post reports, nearly 900 students are enrolled at Burns Middle School, about 50 percent of them black and 40 percent white, according to state data. Forty-three percent qualify for free or reduced-price lunch.

“Dwayne pimps 3 ho’s,” reads one question on the quiz given to students at Burns Middle School in Mobile, Ala. “If the price is $85 per trick, how many tricks per day must each ho turn to support Dwayne’s $800 per day crack habit?”

Rena Philips, a spokeswoman for Mobile County Public School System, said a parent raised concerns about the assignment  Tuesday and the school immediately launched an investigation and placed the teacher on administrative leave. Philips declined to identify the teacher or offer more details, citing privacy concerns related to personnel matters.

“We regret that this happened, especially so close to the end of the school year,” Philips said. “We have 7,500 employees in Mobile County public schools, and the vast majority of them are doing phenomenal work in our classrooms.”

The teacher has been suspended.

One of the students photgraphed the quiz, which is reportedly an internet meme dating back to the 1990s… 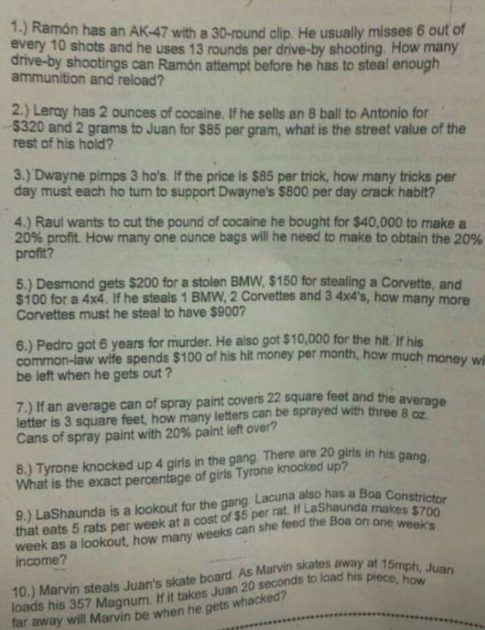 It’s not clear why the Mobile teacher decided to hand it out Friday, just a few days before school let out.

“I couldn’t believe it,” one student’s mother exclaimed, “she told them that it wasn’t a joke, and they had to complete it, and turn it in.”

Of course, we assume the teacher that has been put on administrative leave will still receive full pay and pension…