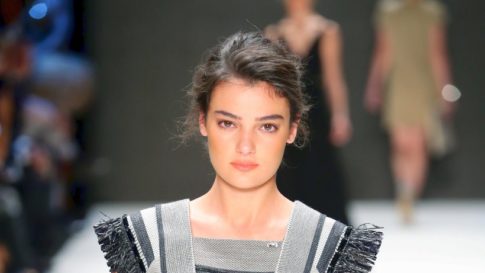 – Ex-Miss Turkey in hot water for ‘insulting Erdogan’ amid crackdown on free speech:

Miss Turkey 2006 has been found guilty for sharing a poem deemed insulting to the Turkish head of state in the latest of some 2,000 defamation cases President Erdogan filed in two years under a law that bans insulting the president.

The Istanbul court gave 27-year-old Merve Buyuksarac a suspended sentence of 14 months for “publicly insulting” the Turkish President Recep Tayyip Erdogan on condition that she does not reoffend within the next five years.

The so-called ‘Master’s Poem, ’ an adaptation of the Turkish national anthem, allegedly criticizes Erdogan, who served as prime minister for more than a decade prior to becoming president and has often been called “Buyuk Usta” [the Big Master]. The poem did not mention Erdogan by name, but made reference to a corruption scandal that allegedly involved his family.

During the hearings, the President’s lawyer, Hatice Ozay, stressed that Buyuksarac’s Instagram post had gone beyond “the limits of criticism” and was in fact “an attack” on Erdogan’s personal rights.

Buyuksarac was briefly arrested at the time the post was made, but then freed as she denied insulting Erdogan. The case however resurfaced, with Tuesday’s court’s decision based on a previously rarely-used Turkish law that forbids insulting the head of state.

The law has been used increasingly often lately to silence those critical of Erdogan’s policies. Since becoming president in 2014, he has filed up to 2,000 cases under this law in trials targeting journalists, foreign and domestic, academics, politicians, comedians, and now – models.

This spring has in fact been rich with cases of Ankara’s witch-hunt on those critical of the current government.

Also on Tuesday, Cengiz Candar, a former columnist for Radikal and Hurriyet newspapers who’s been in the profession for over 40 years, appeared in Istanbul court accused of insulting Erdogan in a series of articles he wrote in the summer of 2015, criticizing Turkey’s renewed conflict against Kurdish rebels. The veteran journalist and an adviser to the late Turkish head of state Turgut Ozal faces up to four years in prison if found guilty.

“These court cases must come to an end,” he told reporters outside the courthouse. “These trials must immediately end with acquittals so that the presidency of the Turkish Republic can preserve its respectability.”

Miss Turkey sentenced to 14-moths jail 4insulting Erdogan https://t.co/RR1cB32jbK
Equality before Erdogan: beautiful or not, gotta like him

In April, Erdogan sparked a row when he submitted a personal complaint for libel against German comedian Jan Böhmermann for a crude poem with rough sexual references about the Turkish president the comedian read on air. He is now prosecuted by German authorities.

In March, the Turkish government shut down and reformed opposition newspaper Zaman, previously a strong critic of the President. Overnight the newspaper turned into a government mouthpiece.

Four Turkish academics faced trial after having been charged with spreading “terrorist propaganda.” Their alleged crime was to denounce the renewed conflict with Turkey’s Kurds, being part of a group of more than 1,000 scholars who signed a declaration in January that was critical of the Turkish government’s military intervention into the predominantly Kurdish southeast of the country.

Foreign journalists have also been targeted and arrested. The latest incidents involved German TV journalist Volker Schwenck and Dutch journalist Ebru Umar. Schwenck was going to the Turkish-Syrian border to report on refugees, but instead was denied entry into Turkey and spent six hours in detention at Istanbul airport. Umar was briefly detained in Turkey over Twitter posts critical of the Turkish President.

Turkey also shut down Russian news agency Sputnik’s website in the country and blacklisted its Istanbul bureau chief, refusing him entry to the country and seizing his residence permit and press credentials.

“Erdogan’s administration doesn’t seem to tolerate any criticism at all. Any journalist, would they criticize Erdogan, risk being imprisoned and legally harassed. In short, journalism is in coma in Turkey,”  Dr. Y. Alp Aslandogan, President of the Alliance for Shared Values and a Board Member of the Gulen Institute told RT, adding that he overall situation with respect to fundamental freedoms in Turkey will only get worse unless the Turkish people interfere.

“The fate of the country is up to the people of Turkey. Unless there is an outcry from Turkish people I don’t know how this situation can be resolved. I’m just hoping that Turkish people will awaken to what’s going on.”