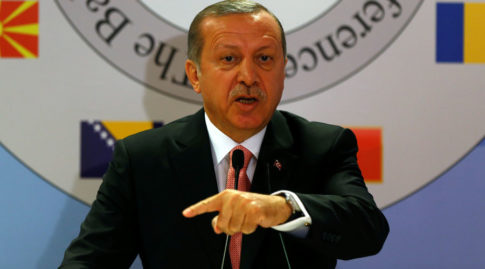 “We will multiply our descendants. They talk about population planning, birth control. No Muslim family can have such an approach,” Reuters cited Erdogan as saying in a live-broadcast speech in Istanbul on Monday. “Nobody can interfere in God’s work. The first duty here belongs to mothers.”

On the International Women’s Day, March 8, the president said he believes that “a woman is above all else a mother,” stressing that women cannot be freed “by destroying the notion of family,” in a speech full of quotes from Koran on the virtues of motherhood.

A couple of days later, Turkey’s first lady praised the often-criticized harem of the Ottoman Empire as “a school for preparing women for life.”

“The harem was a school for members of the Ottoman dynasty and an educational establishment for preparing women for life,” Emine Erdogan said at an official event on the Ottoman sultans in Ankara, according to Turkish TV stations.

While urging his compatriots to protect the family, the president also insisted that “women are not equal to men.”

“Our religion [Islam] has defined a position for women: motherhood,” the Guardian cited Erdogan as saying at a summit on justice for women in Istanbul. The president’s daughter Sumeyye was present among the audience.

“You cannot explain this to feminists because they don’t accept the concept of motherhood,” Erdogan added.

Women and men are not equal “because it goes against the laws of nature” and differences in their “characters, habits and physiques,” believes the Turkish leader.

“You cannot place a mother breastfeeding her baby on an equal footing with men,” Erdogan said, because women cannot do the same work as men “as in communist regimes,” where women are given a shovel and told what to do. “This is against their delicate nature.”

“Since our women are fulfilling that divine mission of keeping humanity alive, they have the right to rest before and after becoming a mother and spare time for their children. Granting this is not a favor, it is just paying a debt,” Davutoglu said in December 2015.

In December last year, Erdogan dubbed birth control a form of treason threatening the nation’s bloodline. Moreover, he believes any married couple should have at least three children in order to boost the Turkish population.

“For years they committed the treason of birth control in this country, seeking to dry up our bloodline. Lineage is very important both economically and spiritually,” Reuters cited Erdogan as telling a couple after serving as a witness at their wedding.