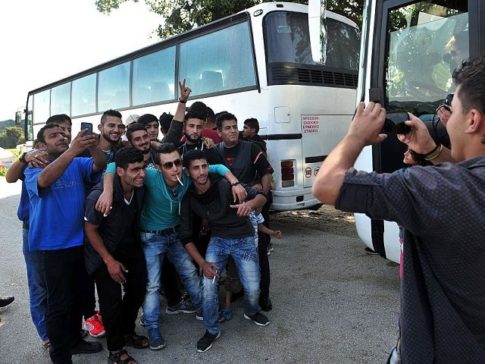 A Swedish police report into rape and sexual assault committed by migrants has blamed “Nordic alcohol culture,” “ignorance” and the “non-traditional gender roles” of European women for the growing problem.

The report notes that Sweden has the worst rates of physical and sexual violence committed against women in the European Union (EU), according to a survey by the EU’s rights agency.

Titled: The Current Situation of Sexual Molestation and Proposals for Action, the document seeks to explain these statistics, and concludes on page 34:

“Sweden tops the new EU Statistics on physical and sexual violence against women, sexual harassment and stalking. The conclusion is that the results are a consequence of Nordic alcohol culture, but also of non-traditional gender roles.”

It explains, on page 20, that the “background to the men who commit sexual molestation is multifaceted.”

“Some argue that sexual molestation is part of bullying, or the means for men to demonstrate their power over girls,” claims the next paragraph. 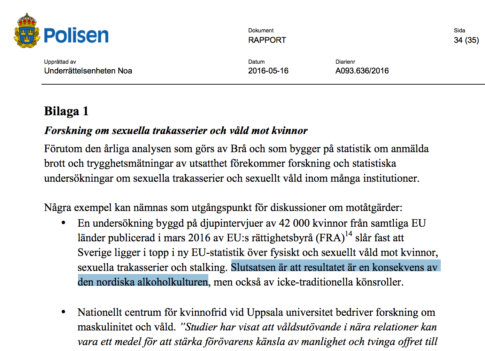 The report also documents how girls in Sweden have been called “whores” and abused for “their clothes,” leaving many fearful to walk the streets.

The explicitly feminist analysis places a strong emphasis on the “problem” of “masculinity,” rather that the non-Western values held by many migrants. Part of the conclusion reads:

“Studies have shown that the use of violence in intimate relationships can be a means of strengthening the perpetrator’s sense of masculinity and forcing the victim to submission.

“Control is exercised over women through violence, thus shaping her according to the man’s idealised vision of femininity. During the exercise of violence, men can feel they embody a typical ‘male.’  Attributes: aggressiveness, strength and control.

“In other words, the violence makes possible what is considered masculine and can provide ‘benefits’ for the perpetrator.”

The report opens by mentioning the mass “planned” sex attack by migrants on New Years’ Eve seen across Europe, and the gang molestations committed by Afghan migrants at the “We Are Stockholm” teenage festival in 2014 and 2015.

“For these reasons, it was decided by the National Commissioner that the vulnerability to sexual molestation among young people would be investigated,” the report explains, noting that “the majority of the victims are girls who are younger than fifteen years old.”

Shortly after the German police were accused of attempting to cover up the Cologne sex attack, it began to be reported that Swedish police had been obscuring the nature of sex attacks in Stockholm for years.

Festival organisers had identified the sex mob phenomenon two years ago, but claimed it would have been “irresponsible” to have spoken out. The police, too, refused to reveal the perpetrators were all Afghan youths, and arrests were only made after this was reported last year.

This morning it was reported by Fria Tider that Swedish police have begun to routinely patrol buses after reports of “Arab gangs” systematically harassing women in Holmsund. The Police have again refused to discuss the perpetrators’ backgrounds.