– First “Shocking” Deposition In Clinton Email Case Reveals She Did Not Use A Password:

Submitted by Eric Zuesse, investigative historian and author, most recently, of  They’re Not Even Close: The Democratic vs. Republican Economic Records, 1910-2010, and of  CHRIST’S VENTRILOQUISTS: The Event that Created Christianity. 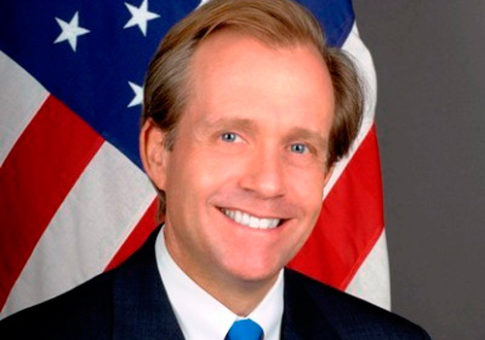 U.S. Ambassador Lewis Lukens’s sworn testimony in the case of Hillary Clinton’s privatization of the U.S. Secretary of State’s email is the first evidence to be released in the Clinton email cases, and it was published on May 26th at the website of Judicial Watch, the organization that originally brought the suit. Headlining “First Deposition Testimony from Clinton Email Discovery Released”, it reported that:

In his testimony, Lukens described his State Department role:

I’ve been a Foreign Service officer for 27 years. I’ve served in Southern China; in the Ivory Coast; in Sydney, Australia; in Dublin, Ireland; in Baghdad; Vancouver, British Columbia; Dakar, Senegal; and three tours in Washington, D.C., as well as my current position in San Francisco.

While Clinton was Secretary of State, his role was heading “logistics and management support” and he had “roughly 110 employees working for me” including the “IRM” or Information Resource Management team. Also, during his questioning, he was asked “You traveled with Mrs. Clinton on all of her foreign travel?” while he was employed there, and he answered: “Yes.”

Representative excerpts from his testimony will be presented here:

While Clinton’s office was being prepared for her:

In other words: her having an e-mail address assigned to her was “required,” but the custom at the U.S. Department of State was to ignore this ‘requirement’.

(AUTHOR’S NOTE: Regardless of whether violating the regulations or even the law has been ignored in the past, violations are supposed to be punished or prosecuted. Prior refusal to prosecute does not constitute legal excuse for continuing refusal to prosecute: it instead constitutes a government in which some persons who are supposedly in the service of, and who are definitely being paid by, the public, are, in practice, above the regulations or even the laws — in other words, a dictatorship. However, this aspect of the questioning was not pursued.)

Lukens then said that her violation on that matter was ignored and that a “BB” or Blackberry account was instead requested by “HRC’ Hillary Rodham Clinton. Lukens’s notes indicated that he had asked HRC’s agent, “On the BB for HRC, can we chat this morning?” and “I may have thought of a workaround [to evade the State Department’s regulations] but need more info on her BB use.” He explained during this questioning of him: “So the crux of the issue was that BlackBerrys and iPhones are not allowed in the Secretary’s office suite, so the question was, how is the Secretary going to be able to check her e-mails if she’s not able to have the Blackberry at her desk with her.”

Q: And so what did you — did you propose a solution at that point?

A: So my proposal was to set up a computer on her desk, a standalone computer [not part of the State Department’s system], for her to be able to access the Internet to check her e-mails [privatized — and therefore not subject to FOIA requests or historians’ investigations].

However, Clinton’s agent insisted on a private computer also being set up “across the hall” “for her to check her BlackBerry” even though no private BlackBerry was allowed on the premises. This was to be the “workaround.”

In an email, Lukens had written, and the questioner referenced it:

Also think we should go ahead, but will await your green light, and set up a standalone PC in the Secretary’s office connected to the Internet, but not go through our system, to enable her to check her e-mails from her desk.

That proposal was accepted and was done. Then:

He was asked why he had proposed this solution, and he said it was “For ease of access” and, “as far as I knew, there was no requirement for her to be connected to our system” (even though he had earlier said that her having an email address assigned to her in the State Department’s system, the OpenNet system, was “required”). He said that the “ease of access” would be because of there being “fewer passwords.”

He was asked whether doing things this way was necessary in order for her to be able to access the Internet from the State Department, and he said, ”the Internet is available” to employees at the office, just as anywhere.

He was asked about the inconvenience of the State Department’s passwords system, and he said that he eliminated her need for any passwords:

A: She wouldn’t have had a password.
Q: So the computer would have just been open and be able to use without going through any security features?
A: Correct.

Though he was paid by U.S. taxpayers, apparently his only concern was to please his superiors, whom he trusted unquestioningly despite their evident unconcern about “security” etc.

In further questioning of Mr. Lukens, it became clear that he never gave any thought to what the purpose behind the State Department’s regulations was: he didn’t even notice that Hillary Clinton’s buddy and top aide Huma Abedin at the Department was also using only a private email account — even though he regularly had been communicating via email with her.

And then the Daily Caller adds the following:

As Secretary of State, Hillary Clinton never used a password to protect her computer emails, and she was clueless about how regular emails work on a conventional computer, according to a deposition of a foreign service officer at the State Department.

She also continued to push for the use of her personal Blackberry phone in the Secretary’s highly-secured government suite even though National Security Agency (NSA) regulations barred its use in that office.

The revelations came as part of a May 18 deposition released Thursday by Judicial Watch, the nonprofit government watchdog group, of Lewis A. Lukens, a veteran 27-year foreign service officer at the State Department who served as the deputy executive secretary and executive director of the Office of the Secretariat from 2008 to 2011.

From the start of her term in January 2009, State Department officials grappled with Clinton’s ignorance of the use of basic computers.  In a January 24, 2009 email from Lukens to the department’s Undersecretary Patrick Kennedy, the foreign service officer said Clinton didn’t know how to use a computer for emails.

Citing a conversation Lukens had with Clinton Chief of Staff Cheryl Mills, he wrote, “She says problem (sic) is HRC does not know how to use a computer to do emails — only Blackberry.”  HRC refers to Hillary Rodham Clinton.

Judicial Watch attorney Michael Bekesha asked Lukens if State Department policy barred the use of personal cell phones in the Secretary’s official office suite, which is one of the most tightly secured facilities in government. Lukens explained the prohibition: “So the crux of the issue was that BlackBerrys and iPhones are not allowed in the Secretary’s office suite, so the question was, how is the Secretary going to be able to check her emails if she’s not able to have the Blackberry at her desk with her.”

The NSA rebuffed multiple attempts  by Clinton to carry her Blackberry into her  office.

Bekesha asked, astonished, “So the computer would have just been open and be able  to use without going through any security features?”

He added that to the best of his knowledge, Clinton never received a waiver to use the Blackberry in the State Department headquarters.

“I’m not aware of any waivers that were made,” Lukens replied.

Mills eventually was able to set up a room “adjacent” to her secure office to allow her to look at her unsecured Blackberry emails.  But it appears that Clinton rarely used the room.

Instead, the Secretary of State would go into a hallway to use her blackberry.

Lukens said in the deposition he saw Clinton using her blackberry in the hall “maybe a half dozen times.”

The official said that he thought Clinton wanted to use the Blackberry “to stay in touch with family and friends,”

He said he didn’t know if she was conducting official business on a private server or with a non-governmental email address. Clinton used an email domain address “clintonemail.com.”

As late as 2011, State Department officials were still trying to get Clinton to use a government-issued blackberry.  But Huma Abedin, Clinton’s deputy chief of staff, shot it down, saying in an August 30, 2011 email “let’s discuss the State Blackberry, [it] doesn’t make a whole lot of sense.”

“Do you recall if Ms. Abedin used non-state.gov e-mail accounts to correspond with you,” Bekesha asked.

“Well, the answer is yes,” he replied.

Lukens displayed a great lack of curiosity about Clinton’s use of prohibited electronic devices.

“Did you ever think about whether or not she was going to use that equipment to conduct official government business,” asked the Judicial Watch attorney.

Lukens, as executive director of the executive secretariat for the State Department, said he was only trained once to handle documents under the Freedom of Information Act — in 1989 — when he first joined the department. He’s never had a refresher course in the years since that first training.

“Do you know if any point after 1989 you received updated guidance or training about the use of email as it related to federal records and the Freedom of Information Act,” Bekesha asked.

“Not that I recall,” replied Lukens.

The State Department official also revealed that he routinely deleted official emails “to clear out space in my inbox.”

He said he “kept files for various trips and things where I would keep e-mails until trips were over, but after trips were over I would often delete the files to clear — to clear out space in my inbox.”