We’ve repeatedly pointed out that there are many indicators which show that the last 5 years have been worse than the Great Depression of the 1930s, including:

Indeed, the number of Americans relying on government assistance to obtain basic food may be higher now that during the Great Depression. The only reason we don’t see “soup lines” like we did in the 30s is because of the massive food stamp program.

We pointed out in 2014 that Europe is stuck in an economic malaise worse than a depression, and cited charts showing that Europe’s GDP is recovering much slower than after the Great Depression: 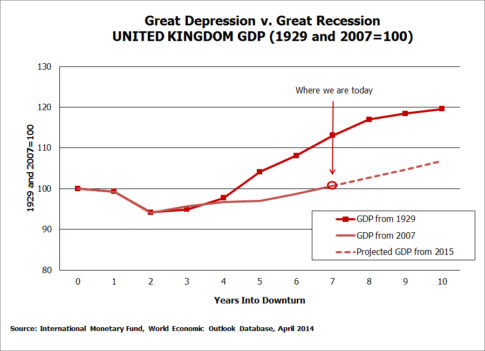 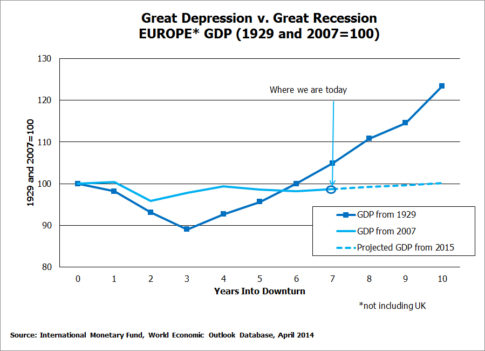 Last year, we noted that an important economic indicator – the velocity of money – has crashed far worse than during the Great Depression, and that the howling winds of deflation are hammering the U.S. just as much as Europe.

We noted that last year was the first pre-election year stock market loss since the Great Depression.

In January, we pointed out that a prominent economist said:

Future economic historians may not call the period that began in 2007 the “Greatest Depression.” But as of now, it is highly and increasingly probable that they will call it the “Longest Depression.”

In March, the Federal Reserve Bank of St. Louis noted that – as with Europe – America’s GDP is recovering much slower than after the Great Depression: 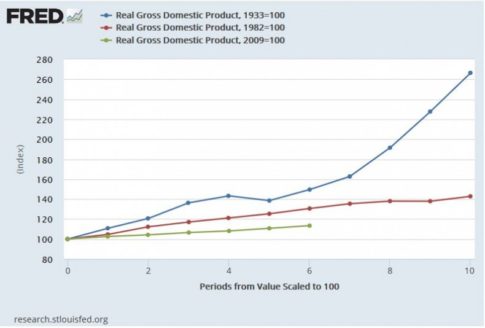 More young adults in the U.S. are living with their parents than at any time since around 1940, according to a new Pew Research Center analysis of census data.