– “We Will Fight This All The Way To The Supreme Court” – 11 States Sue Obama Over Transgender Bathrooms:

When last week, Oklahoma threatened to impeach Obama over the administration’s recommendations on accommodating transgender students, saying the president overstepped his constitutional authority, few paid much attention. After all, it is safe to say there have been far more egregious violations of the constitution by this administration, for it to be too worried about allowing transsexuals to use any bathroom they choose.

However, now that ten other states joined Oklahoma overnight in suing Obama, it may be time to pay attention.

According to Reuters officials from 11 U.S. states sued the Obama administration on Wednesday to overturn a directive telling schools to let transgender students use bathrooms matching their gender identity, decrying the policy as “a massive social experiment.”

The 11 states’ lawsuit accused the administration of taking that argument too far and improperly, widening the scope of interpretation of civil rights law.

Ramping up the simmering battles over contentious cultural issues in America, the states, led by Texas and most with Republican governors, accused the federal government of rewriting laws by “administrative fiat.” Texas was joined by Alabama, Georgia, Louisiana, Oklahoma, Tennessee, Utah, West Virginia and Wisconsin, plus Arizona’s Department of Education and Maine’s governor. 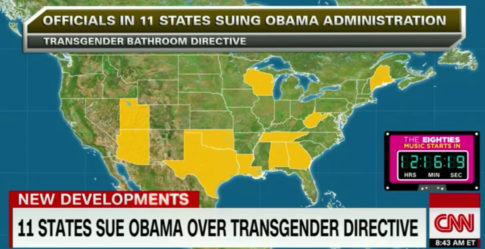 Texas Republican Gov. Greg Abbott said Wednesday that the state’s attorney general, Ken Paxton, would challenge the controversial order, which tells school district to allow transgender students to use the restroom of their choice. No other details were immediately available Wednesday about the number of states joining in on the suit. Abbott announced the litigation in a tweet.

How serious are the plaintiffs? Very: “We are willing to fight this all the way to the Supreme Court if we have to,” Republican Texas Attorney General Ken Paxton told reporters in Austin.

Amid a national debate on transgender rights, President Barack Obama’s administration on May 13 told U.S. public schools that transgender students must be allowed to use the bathroom of their choice, upsetting Republicans and paving the way for fights over federal funding and legal authority.

The states’ lawsuit accused the federal government of overstepping its constitutional powers by taking actions that should be left to Congress or individual states. It also challenged the Obama administration’s interpretation of federal civil rights law with regard to sex and gender.

The lawsuit said the administration “conspired to turn workplace and educational settings across the country into laboratories for a massive social experiment, flouting the democratic process, and running roughshod over commonsense policies protecting children and basic privacy rights.”

On the other hand, transgender rights advocates argued it is transgender people who need protection, particularly transgender women who are disproportionately the victims of assaults and would be forced to use men’s bathrooms if states succeed in forcing people to use bathrooms matching their sex at birth. Likewise, transgender men, many of whom grow facial hair, would be required to use women’s bathrooms along with girls.

“This action puts students at risk for the sake of politics,” said Alison Gill of the Trans United Fund advocacy group supporting transgender rights. Gill said the states’ lawsuit did not reflect the position of most school boards and administrators.

Liberals were up in arms over the lawsuit: Paul Castillo, a lawyer with Lambda Legal, which supports lesbian, gay, bisexual and transgender (LGBT) rights, said the lawsuit represented an “unprecedented attack against transgender people across the United States.” “These states are demonstrating the great lengths they will go to in order to discriminate against transgender individuals,” Castillo said.

Some could say that it is more ludicrous that the Supreme Court will be involved in an issue seen by many as an attempt by Obama to obtain even more liberal votes.

It is unclear how SCOTUS would respond if this issue is indeed taken that far. Peter Lake of Stetson University College of Law in Florida said the U.S. Supreme Court has taken a narrow view of the meaning of “sex” under the law, but in recent years lower courts have been more likely to defer to the Obama administration’s broader definition.

“My sense is a certain momentum is building for broader protection of (LGBT) rights, and we might be seeing a moment of federal civil rights law in long-term transition,” Lake said.

On the other hand, if Trump wins the presidency and appoints a deeply conservative judge, we may not.