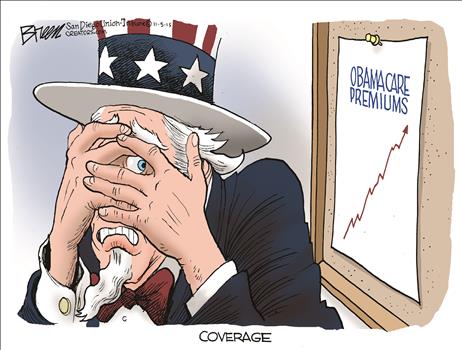 – This Is How Much Your Health Insurance Payment Is About To Jump By:

It’s official: years of warnings that Obamacare will lead to dramatic increases in healthcare premiums are about to be validated.

As the WSJ writes, big health plans stung by losses in the first few years of the U.S. health law’s implementation are seeking hefty premium increases for individual plans sold through insurance exchanges in more than a dozen states.

To be sure, we have extensively covered the imminent danger of rising healthcare prices as a result of Obamacare’s intrusive intervention in the insurance sector; however now that this is about to become mainstream information, we expect consumers to hunker down and save even more in anticipation of what is about to be a shock price increase for millions of middle-class American families.

As the WSJ reports, the insurers’ proposed rates for individual coverage in states that have made their 2017 requests public largely bear out health plans’ grim predictions about their challenges under the health-care overhaul. According to the insurers’ filings with regulators, large plans in states including New York, Pennsylvania and Georgia are seeking to raise rates by 20% or more.

In states such as Florida and Maryland, insurers are seeking to raise premiums by percentage averages that are markedly above 10%. Among those that have published so far, only in Vermont do big insurers’ requests fall below 10%.  Proposals still have to be approved by state regulators, and a full picture of final approved rates across the entire country likely won’t be known until shortly before HealthCare.gov and state equivalents reopen for the law’s fourth main enrollment window on Nov. 1.

Nonetheless, the proposed average increases that are available are a vivid indicator this year of how insurers are adapting to the 2010 Affordable Care Act’s transformation of the way health coverage is priced and sold in the U.S.

So for all those currently enrolled in healthcare plans administered in the following states, this is how much, on average, your plans will go up by. 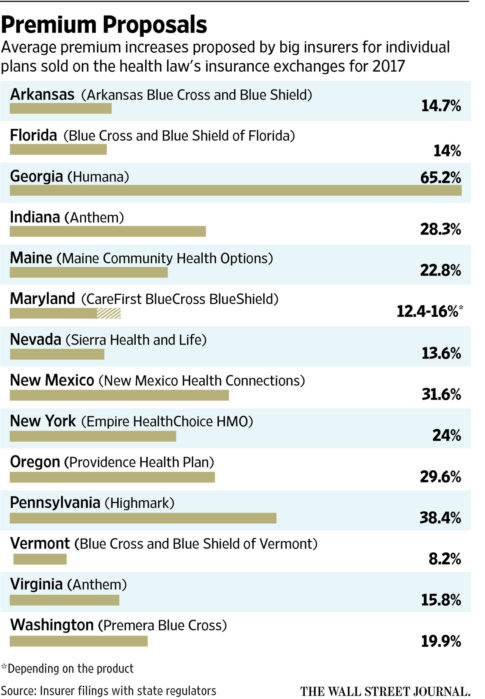 The silver lining? Since this effective tax goes straight to “boosting US GDP“, we look forward to a year of “above trendling” GDP growth thanks to this forced reallocation of consumers’ disposable income into the infamous “healthcare” category.