– The Anger of the Unprivileged Is Rising Globally:

Privilege serves the same purpose–benefiting the few at the expense of the many–regardless of the system’s ideological labels.

The righteous disgust with the status quo that spawned the broad-based campaigns of Bernie Sanders and Donald Trump is not unique to the U.S. Globally, those disenfranchised by the status quo–the unprivileged, or in Peggy Noonan’s phrase, the unprotected— are starting to express their discontent in the streets, in social media and in elections.

Why are people around the world angry? It’s obvious to everyone in the unprivileged classes and a mystery to the “we’re doing just fine here, what’s your problem?” privileged classes: The system is rigged to benefit the protected few and marginalize the unprotected many.

The problems are not just political; they are structural. As I outline in my new book, Why Our Status Quo Failed and Is Beyond Reform, there are two structural engines of disorder at the heart of the system:

1. Automation, software and the forces of globalization are disrupting jobs and wages everywhere.

2. Centralized hierarchies and the forces of financialization have extended the power of privilege globally so the few are benefiting at the expense of the many, as revealed in this chart of global wealth: 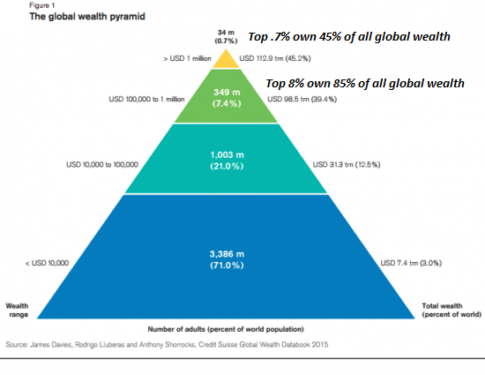 To understand rising wealth/income disparity and the increasing concentration of wealth, we must first understand the dual nature of privilege. Just as power comes in two flavors–hard power (military power) and soft power (exporting cultural wares and values)–so does privilege.

Hard-wired privileges are those that grant the holder of an office or position in the hierarchy specific rights to accumulate income, wealth and political power that are not available to the unprivileged. Officials in corrupt countries gain the right to collect fees from citizens as a direct result of their official position. Financiers in the U.S. have access to unlimited credit at low rates (free money for financiers) as a direct result of their position atop the financial pyramid.

Field-effect (“soft”) privileges are defined by class and access rather than by the hard-wired authority of office or position in a formal hierarchy. Field-effect privileges include: enhanced access to Ivy League higher education granted to children of alumni and major donors; membership in exclusive clubs; access to “old boy” networks of alumni and partners, and so on.

Field-effect (“soft”) privileges are one primary reason why the income of the top 20% has risen from 40% of total U.S. income to 51% in the past two decades. In a rapidly financializing, globalized economy, those with access to higher education, class connections and abundant credit have built-in advantages over those without all three advantages, which are self-reinforcing.

(I use the term field-effect to suggest that these privileges act like electrical fields, affecting all within their range, often without the privileged even being aware of their privileges. Hence the upper-middle penchant for overlooking all their class advantages and attributing their success to hard work. Well, yes, but that’s not the entire story: we must also measure the often-subtle benefits of field-effect privileges.)

(Income data source: Income and Poverty in the United States: 2014)

Having an Ivy League (or equivalent top-tier public university) diploma is a plus, but it doesn’t provide a wealth of self-reinforcing privileges unless it is combined with upper-class connections and networks and easy access to credit (to scoop up productive assets on the cheap). Together, these field-effect privileges create synergies that concentrate wealth and power.

Interestingly, privilege serves the same purpose–benefiting the few at the expense of the many–regardless of the system’s ideological labels. Socialist, Communist and free-market elites loot their populaces and national wealth with equal gusto. Those who came to do good and stayed to do well first accumulate privileges, which they then leverage into wealth and power.

The grievances of Chinese workers robbed of their wages, Greek small-business owners burdened by ever-rising taxes, downsized corporate warriors in the U.S., etc. may appear to be different, but beneath the surface these grievances all arise from one source: unearned privileges that benefit the few at the expense of the many.

The only way to eliminate social and economic injustice is to eliminate privilege, which is the heart of my book A Radically Beneficial World.