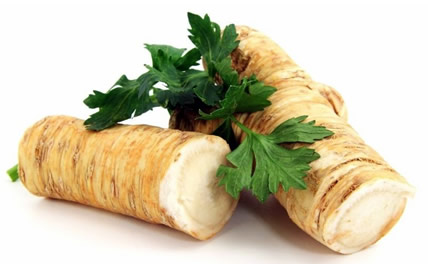 – Horseradish Contains Compounds Which Remove Cancer From The Body:

Horseradish (Cochlearia armoracia) is a natural antibacterial which contains compounds that could help detoxify and eliminate cancer-causing compounds in the body, a study has shown.

The cancer-fighting compound, known as glucosinolates, undergoes a series of chemical reactions that activates enzymes involved in the detoxification of cancer-causing molecules.

Health-supportive molecules like glucosinolates are concentrated in these horseradish greens in the same way that they are concentrated in the leaves of the plants. Even within individual prostate cells, glucosinolates beneficially influence the metabolism of hormones, which may explain why a higher consumption of mustard family vegetables is associated with a lower risk for prostate cancer.

In addition, one of the anti-carcinogens produced, allyl isothiocyanate (AITC) demonstrated 90% absorption when ingested.

Horseradish’s pungent flavour is primarily caused by the AITC. This compound is produced from the hydrolysis of sinigrin by the enzyme myrosinase.

One study found that sinigrin accounts for about 80-90% of total glucosinolate (GS) content in horseradish roots and leaves.

The team from the University of Illinois College of Agricultural, Consumer and Environmental Sciences (ACES) wanted to investigate the AITC formation from several horseradish types.

In addition, the study also set out to evaluate the potential cancer-prevention properties of horseradish roots and antioxidant activity.

In total, 11 horseradish strains were selected for this study and compared in quantity and activity.

They were then given a rating of either US Fancy No. 1, or US No. 2 based on diameter and length of the root.

The U.S. Fancy and U.S. No.1 are major available grades in the market for horseradish.

The US Fancy and US No. 1 are major available grades in the market. However, there is no information on whether the US Department of Agriculture (USDA) grade horseradish root not only on food quality, but also with cancer chemopreventive activity.

The team found that the higher-grade US Fancy horseradishes had significantly more glucosinolates than US No. 1.

Concentrations of various glucosinolate hydrolysis products also differed according to USDA grade, with US Fancy having greater AITC and US No. 1 having greater 1-cyano 2,3-epithiopropane (CETP), another by product of sinigrin.

“We knew horseradish had health benefits, but in this study we were able to link it to the activation of certain detoxifying enzymes for the first time,” says University of Illinois crop scientist Mosbah Kushad.

“There was no information on whether the USDA grade of the horseradish root is associated with cancer preventive activity, so we wanted to test that,” he added.

Studies into the cancer-fighting properties of horseradish have revealed the depth of its complex compound make-up.

Different glucosinolate concentrations between US horseradish and Nordic horseradish were attributed to the weather and/or soil conditions.

A recent paper reported that sulphate supply was closely related with glucosinolate (GS) accumulation in horseradish.

In a similar vein, the researchers in the current study suggested the reduced variation in AITC may be related to its volatility.

Researchers found the average AITC concentration from the six US Fancy grade horseradish root extracts was 42.4 micromoles (micromol) per grams dry weight and ranged from 37.4 to 47.1 micromol/g dry weight.

Horseradish root diameter (grade) was another source of variation in AITC and CETP concentrations. In general, AITC levels fell and CETP levels rose in the lower root grades including US No. 1 and US No. 2, compared to the corresponding levels in US Fancy grade roots.