– We’re in the Eye of a Global Financial Hurricane:

The only “growth” we’re experiencing are the financial cancers of systemic risk and financialization’s soaring wealth/income inequality.

The Keynesian gods have failed, and as a result we’re in the eye of a global financial hurricane. 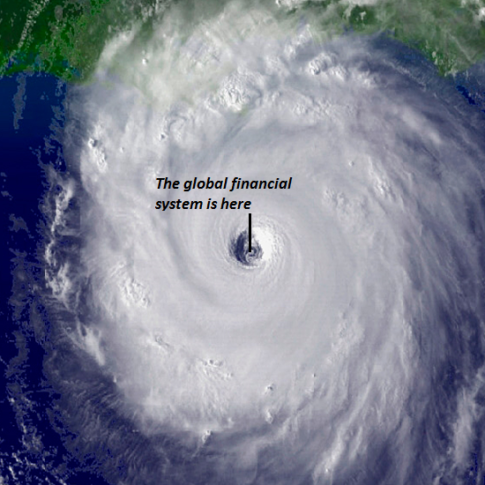 The Keynesian god of growth has failed.

The Keynesian god of borrowing from the future to fund today’s consumption has failed.

The Keynesian god of monetary stimulus / financialization has failed.

Every major central bank and state worships these Keynesian idols:

1. Growth. (Never mind the cost or what kind of growth–all growth is good, even the financial equivalent of aggressive cancer).

2. Borrowing from the future to fund today’s keg party, worthless college diploma, particle board bookcase, stock buy-back, etc. (oops, I mean “investment”)–a.k.a. deficit spending which is a polite way of saying this unsavory truth: stealing from our children and grandchildren to fund our lifestyles today.

Here is my definition of Financialization:

Financialization is the mass commodification of debt and debt-based financial instruments collaterized by previously low-risk assets, a pyramiding of risk and speculative gains that is only possible in a massive expansion of low-cost credit and leverage.

That is a mouthful, so let’s break it into bite-sized chunks.

Home mortgages are a good example of how financialization increases financial profits by jacking up risk and distributing it to suckers who don’t recognize the potential for staggering losses.

In the good old days, home mortgages were safe and dull: banks and savings and loans institutions issued the mortgages and kept the loans on their books, earning a stable return for the 30 years of the mortgage’s term.

Then the financialization machine revolutionized the home mortgage business to increase profits. The first step was to generate entire new types of mortgages with higher profit margins than conventional mortgages. These included no-down payment mortgages (liar loans), no-interest-for-the-first-few-years mortgages, adjustable-rate mortgages, home equity lines of credit, and so on.

The interest rate, risk and profit margins were all much higher for the originators. What’s not to like? Well, the risk of default is a problem. Defaults trigger losses.

Financialization’s solution: package the risk in safe-looking securities and offload the risk onto suckers and marks. Securitizing mortgages enabled loan originators to skim the origination fees and profits up front and then offload the risk of default and loss onto buyers of the mortgage securities.

Securitization was tailor-made for hiding risk deep inside apparently low-risk pools of mortgages and rigging the tranches to maximize profits for the packagers at the expense of the unwary buyers, who bought high-risk securities under the false premise that they were “safe home mortgages.”

Financialization– which can only expand to dominate an economy if it is supported by a central bank bent on expanding credit–has two inevitable and highly toxic consequences:

— Risk seeps into every nook and cranny of the financial system, greatly increasing the odds of a systemic domino reaction in financial meltdowns. This is precisely what we saw in the 2008-09 Global Financial Meltdown (GFM): supposedly “contained” subprime mortgages toppled dominoes left and right, bringing the entire risk-saturated system to its knees.

— Extraordinary wealth and income inequality, as those closest to the central bank money/credit spigots can scoop up income-producing assets first at much lower costs than Mom and Pop Main Street investors.

The rising anger of the masses left behind by the central bank / financialization wealth harvesting machine is the direct result of Keynesian monetary stimulus that rewards debt-based speculative gambles by those closest to the cheap-credit spigots.

The global financial system is in the eye of an unprecedented hurricane. While central bankers are congratulating themselves on their god-like mastery of Nature, and secretly praying to the idols of the Keynesian Cargo Cult every night, the inevitable consequence of borrowing from the future, the obsession with “growth” at any cost and financialization /monetary stimulus, a.k.a. the rich get richer thanks to central banksis systemic collapse.

Don’t fall for the mainstream media and politicos’ shuck-and-jive that all is well and “growth” will return any day now. The only “growth” we’re experiencing are the financial cancers of systemic risk and financialization’s soaring wealth/income inequality.