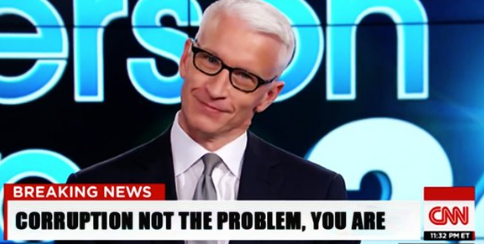 – Mad About Rigged Elections? Mainstream Media Says “You” Are The Problem:

Mainstream headlines constantly decry Bernie Sanders supporters for disrupting events in outrage, as if their protests and demonstrations somehow illustrate the devolution of the elections. But that focus by the corporate media utterly negates the consistent and continual reports of fraud and disenfranchisement fueling their ire.

And it’s getting ridiculous.

Newsweek, though far from alone, offered a prime example of the obfuscation of the election fraud and questionable campaign tactics by Hillary Clinton in its skewering of Sanders’ supporters.

“Get Control, Senator Sanders, or Get Out,” Newsweek’s Kurt Eichenwald titled his op-ed — which thoroughly blasts the Vermont senator — as if he were somehow responsible for both the electoral chaos and the actions of an irate voting public.

“So, Senator Sanders,” Eichenwald writes [with emphasis added], “either get control of what is becoming your increasingly unhinged cult, or get out of the race. Whatever respect sane liberals had for you is rapidly dwindling, and the damage being inflicted on your reputation may be unfixable. If you can’t even manage the vicious thugs who act in your name, you can’t be trusted to run a convenience store, much less the country.”

Because what Eichenwald obviates most readily in his attack is the inability to understand why those protests might be occurring in the first place. Judging by the timing of his article, it’s likely Eichenwald wrote it after chaos broke out at the Nevada Democratic Convention on Saturday — chaos that transpired after the party took it upon itself to ignore thousands who rightly believed Sanders delegates had been excluded unfairly from the caucus proceedings.

Despite the call for a recount, party officials refused to follow necessary procedure and abruptly adjourned the convention, leaving thousands of voters in the lurch — and hotel security and local law enforcement to deal with the aftermath. When things seem suspicious, apparently Eichenwald feels voters should not only have no recourse, they should be happy about it.

“Sanders has increasingly signaled that he is in this race for Sanders,” he continues, “and day after day shows himself to be a whining crybaby with little interest in a broader movement.”

It would be nice if Eichenwald’s hit piece were as much a joke as it comes across, but clearly he’s missed the point — and the vast movement supporting not only Sanders, but electoral justice. Worse, he didn’t stop there:

“Signs are emerging that the Sanders campaign is transmogrifying into the type of movement through which tyrants are born.

“The ugly was on display” at the aforementioned Nevada convention, Eichenwald adds, “where Hillary Clinton won more delegates than Sanders.”

No kidding. That would be precisely the issue that “cult” expressed fury about — Clinton managed to put yet another state under her belt under highly questionable circumstances. In fact, suspect happenings at nearly every primary and caucus so far oddly favor the former secretary of state — and Nevada stood as further testament to why voters are practically up in arms over what appears to be electoral favoritism.

But Eichenwald wasn’t alone in overlooking those concerns — or in blatantly mischaracterizing both that bias and its consequential thwarting of the wishes of a hefty segment of the voting public.

“‘It’s been vile,’ said Ms. Lange, who riled Sanders supporters by refusing their requests for rule changes at the event in Las Vegas,” Rappeport notes, adding, “The vicious response comes as millions of new voters, many of whom felt excluded by establishment politicians, have flocked to the insurgent campaigns of Mr. Sanders and Mr. Trump.”

Though he at least presented that aspect of the elections fairly, his description of what Lange actually did in Nevada misses the mark — that rules change had originally occurred prior to the convention, and Lange’s hasty and subjective decision on a contentious voice vote to permanently install the change arguably created the eruption of anger. But a number of Times staff have contributed sizeable amounts to Hillary’s campaign — and a Clinton family organization also donated $100,000 to the Times’ charitable organization the same year it endorsed her. Funny how bias thus peppers its reporting.

But the media roasting of Sanders and his supporters also appeared in the Sacramento Bee — where the editorial board also called the senator to task for the Nevada incident in lieu of calling out the controversial elections. According to the Bee,

“The episode had the reek of Trump rallies, where threats, insults, and sucker punches to defend the presumptive Republican nominee have been common. Yet looking back at the hundreds of Sanders supporters who descended on a Clinton rally in East Los Angeles earlier this month to intimidate her supporters, making one little girl cry, it now seems inevitable that the same kind of violent eruption would afflict those ‘feeling the Bern.’”

While the protest in L.A. certainly rattled Clinton supporters, violence didn’t pepper the event. One Sanders supporter — sporting a Free Hugs tee-shirt, no less — even assisted Clinton-supporting families with teary-eyed children in tow navigate through the crowd. While reports that someone ripped apart a young girl’s pro-Hillary sign might be valid, it would stand as the exception to what amounted to a boisterous demonstration over justifiable grievances. And, again, this obfuscation forgets entirely the need for demonstrations, which Hillary Clinton — in repeated lies, controversial policy proposals, and a campaign replete with fraud complaints — has clearly helped create.

Perhaps corporate, mainstream media — instead of targeting the symptom — should attempt to report its root cause.

Perhaps enormous swaths of voters being dropped from the rolls in New York; Clinton’s inexplicably astronomical luck in coin tosses in Iowa; inexcusably untrained elections volunteers and their equally inexcusable tendency allowing Clinton supporters to participate in caucuses without first being registered; or any number of other examples from the mountain of ever-growing evidence the elections are, indeed, rigged, are infinitely more deserving of headlines than hit pieces against those protesting such affronts to the American electoral process.

Or perhaps we should all just do as Eichenwald suggests — swallow our pride and our desire for a less corrupt and fairer system — and turn tail.

Or not. Because this system is rigged — and the corporate media helps pull the strings. But as long as independent media reports what the mainstream refuses, and as long as fraud inundates the 2016 election, there will be protests — regardless of whether or not Newsweek and the Times and the rest of their ilk ever grasp accuracy in reporting.