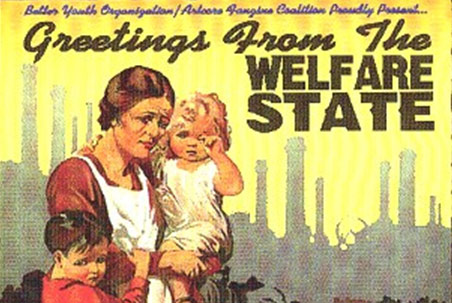 Who exactly is the burdensome, broken and disturbingly unsensible welfare system being run for?

A new study found that both illegal and legal immigrants, who typically work low wage jobs, receive more in government assistance each year than struggling American families do.

via the Washington Examiner:

Illegal immigrant households receive an average of $5,692 in federal welfare benefits every year, far more than the average “native” American household, at $4,431…

The Center for Immigration Studies, in an analysis of federal cost figures, found that all immigrant-headed households — legal and illegal — receive an average of $6,241 in welfare, 41 percent more than native households. As with Americans receiving benefits such as food stamps and cash, much of the welfare to immigrants supplements their low wage jobs.

The total cost is over $103 billion in welfare benefits to households headed by immigrants.

Not only is this staggering cost a source of contention with American taxpayers, but it is something of a hidden boon for corporations who can get away with paying workers, many of whom are illegal, less money in wages because their livelihoods are being supplemented by welfare.

For traditional non-immigrant families, it is a double blow to an economy that has forced many native Americans on welfare as well while they watch good jobs slip away and an increasing number of desperate people from all backgrounds race to the bottom.

Though there are many employers benefiting from government largess, Walmart is the classic example of the company that pays its workers minimum wage, only to encourage them to apply for food stamps and other welfare benefits – which are largely then spent inside their own store walls.

But worse than the already over-sized dependence upon the federal government by new arrivals and undocumented immigrants, is that the pace set by the amnesty president who clearly wants to break the system Cloward-Piven style.

Obama is apparently calling for a huge increase in welfare benefits for minors, who according to the Washington Examiner, are often being used by their illegal immigrant parents for household income:

The new report follows another that found President Obama seeking $17,613 for every new illegal minor, more than Social Security retirees get.

While millions of average citizens are struggling and watching the American dream die in front of them, the government is doing all it can to break the back of the real economy, and hand off money from the dole to the very competing workforce that is undermining the effort of Americans just to make it and hold on to what they have.

Stay vigilant, the squeeze is on.

Shock Report: 70 Million People Would Be Starving in the Streets Without Government Welfare Programs

Why Is Obama Encouraging Illegal Immigration When We Can’t Take Care Of Millions Of Our Own Citizens?

This Is How Bad The Economy Really Is: “Walmart Customers Are Too Broke To Shop”