– The Shift To A Cashless Society Is Snowballing:

Love it or hate it, cash is playing an increasingly less important role in society.

In some ways this is great news for consumers. The rise of mobile and electronic payments means faster, convenient, and more efficient purchases in most instances. New technologies are being built and improved to facilitate these transactions, and improving security is also a priority for many payment providers.

However, as Visual Capitalist’s Jeff Desjardins explains,there is also a darker side in the shift to a cashless society. Governments and central banks have a different rationale behind the elimination of cash transactions, and as a result, the so-called “war on cash” is on. 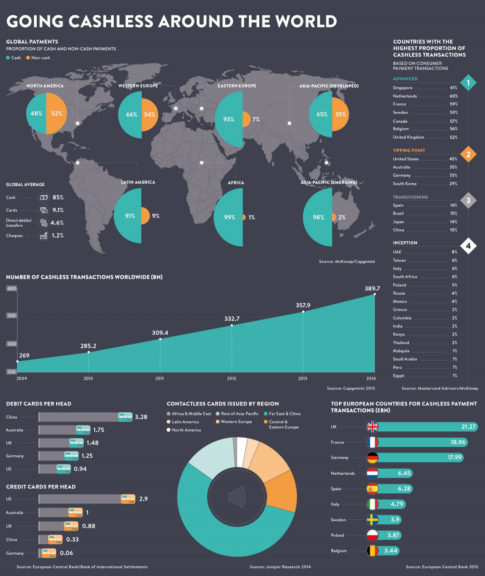 ON THE PATH TO A CASHLESS SOCIETY

The Federal Reserve estimates that there will be $616.9 billion in cashless transactions in 2016. That’s up from around $60 billion in 2010.

Despite the magnitude of this overall shift, what is happening from country to country varies quite considerably. Consider the contradicting evidence between Sweden and Germany.

In Sweden, about 59% of all consumer transactions are cashless, and hard currency makes up just 2% of the economy. Yet, across the Baltic Sea, Germans are far bigger proponents of modern cash. This should not be too surprising, considering that the German words for “debt” and “guilt” are the exact same.

Within Germany, only 33% of consumer transactions are cashless, and there are only 0.06 credit cards in existence per person.

THE DARK SIDE OF CASHLESS

The shift to a cashless society is even gaining momentum in Germany, but it is not because of the willing adoption from the general public. According to Handelsblatt, a leading German business newspaper, a proposal to eliminate the €500 note while capping all cash transactions at €5,000 was made in February by the junior partner of the coalition government.

Governments have been increasingly pushing for a cashless society. Ostensibly, by having a paper trail for all transactions, such a move would decrease crime, money laundering, and tax evasion. France’s finance ministerrecently stated that he would “fight against the use of cash and anonymity in the French economy” in order to prevent terrorism and other threats. Meanwhile, former Secretary of the Treasury and economist Larry Summers has called for scrapping the U.S. $100 bill – the most widely used currency note in the world.

It’s not simply an argument of the above government rationale versus that of privacy and anonymity. Perhaps the least talked-about implication of a cashless society is the way that it could potentially empower central banking to have more ammunition in “smoothing” out the way people save and spend money.

By eliminating the prospect of cash savings, monetary policy options like negative interest rates would be much more effective if implemented. All money would presumably be stored under the same banking system umbrella, and even the most prudent savers could be taxed with negative rates to encourage consumer spending.

While there are certainly benefits to using digital payments, our view is that going digital should be an individual consumer choice that can be based on personal benefits and drawbacks. People should have the voluntary choice of going plastic or using apps for payment, but they shouldn’t be pushed into either option unwillingly.

Forced banishment of cash is a completely different thing, and we should be increasingly wary and suspicious of the real rationale behind such a scheme.

1 thought on “The Shift To A Cashless Society Is Snowballing”