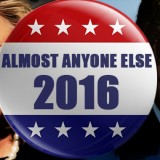 It’s happening! According to a new poll, Americans have finally maxed out their tolerance for “lesser evils” in presidential politics. The survey, published by independent research firm, Data Targeting, found a majority of Americans now want an independent candidate to take on Hillary Clinton and Donald Trump — two of the most disliked candidates in recent history.

Researchers for the poll, conducted among 997 registered voters via both home and mobile phones this month, reported that “58% of respondents are dissatisfied with the current group of Republican and Democratic candidates for President” — and that 55 percent believe there should be an independent ticket (it is unclear why 3 percent apparently dislike the current candidates but puzzlingly do not think there should be another option). In perhaps the most extreme finding of the analysis, “a shocking 91% of voters under the age of 29 favor having an independent candidate on the ballot.” Considering younger generations’ lack of party allegiance and disillusionment with the status quo, their disapproval of Clinton and Trump seems predictable — but 91 percent constitutes near-total rejection.

Tellingly, over 68 percent of participants in the poll were over the age of 50. Older generations are more likely to be attached to party identity, making their acceptance of other options a telling indicator of the populace’s distaste for their current options.

The United States has notoriously clung to the narrow two-party duopoly for most of its history — even as the crafters of the Constitution, for all their staggering shortcomings, cautioned of the dangers of such myopic political representation and party allegiance.

But considering the unpopularity of Trump and Clinton — the former has a 55 percent unfavorability liking, the latter 56 percent — Americans appear to be turning a corner on their perception of who deserves power in politics.

In fact, 65 percent of poll respondents said they would be “at least somewhat, pretty or very willing to support a candidate for President who is not Donald Trump or Hillary Clinton” — a stark difference from 2012, when Americans resisted deviation from the norm. A Gallup poll from that year highlighted the nation’s two-party rigidity. “U.S. registered voters show limited support for third-party candidates…with the vast majority preferring Barack Obama or Mitt Romney,” analysts reported just a few months before the 2012 general election. They concluded about 5% of Americans would vote for a third-party candidate that year.

Just four years later, however, that figure has exploded. As the Data Testing report explains:

Independents were even more willing to break away from the options they’ve been given. “Among voters with an unfavorable opinion of both Trump and Clinton, the independent actually wins the ballot test,” researchers reported, noting that of the three options, 7 percent of respondents chose Clinton, 11 percent chose Trump, and a staggering 56 percent chose the unspecified third-party candidate. Though these ballot test findings are lower than the statistic that 65 percent would be open to breaking away from Clinton and Trump, the increase of third-party interest from 2012 remains palpably significant.

It should be noted that Data Targeting is a GOP-affiliated political research firm, however, the results indicate little room for bias. In fact, they are paramount in an election where, as the analysis notes, Clinton and Trump provoke more animosity than enthusiasm. Perhaps highlighting lingering attachments to two-party thinking, Clinton’s highest unfavorability rating (78 percent) came from Republicans, while Trump’s highest unfavorability rating (71 percent) came from Democrats.

Regardless, it is undeniable Americans are fed up with the system at large. According to another recent poll, just over half believe elections are rigged. Interest in third-party options, like the Libertarian and Green parties, is also steadily growing. As Ron Paul, the outspoken former presidential candidate, whose 2012 campaign was undermined by the media and Republican establishment, recently said, “I’ve never bought into this idea that the lesser of two evils is a good idea” — and Americans increasingly agree. According to a Gallup poll released last year, 43 percent of Americans identify as independent — the highest number in the history of the poll.

Meanwhile, faith in mainstream media is also dwindling — and it tends to dip even lower in election years, as Americans observe the perpetual circus acts performed by corporate outlets.

With contentious power struggles raging both within the major parties and between them, Americans appear to be sobering up to the realities of party dominance and loyalty as they evolve beyond their crumbling political past.

It might have taken a shameless war criminal and a repugnant demagogue to finally wake Americans from their two-party stupor, but it’s happening — and it’s better late than never.