– Leaking Las Vegas: Lake Mead Plunges To Lowest Level Ever As “The Problem Is Not Going Away”:

The hopes of an El Nino-driven refill from last summer’s plunging levels of the nation’s largest reservoir have been dashed as AP reportsLake Mead water levels drop to new record lows (since it was filled in the 1930s) leaving Las Vegas facing existential threats unless something is done. Las Vegas and its 2 million residents and 40 million tourists a year get almost all their drinking water from the Lake and at levels below 1075ft, the Interior Department will be forced to declare a “shortage,” which will lead to significant cutbacks for Arizona and Nevada. As one water research scientist warned, “this problem is not going away and it is likely to get worse, perhaps far worse, as climate change unfolds.” 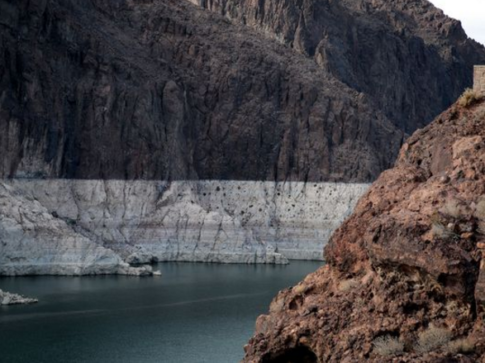 As USA Today reports,the nation’s largest reservoir has broken a record, declining to the lowest level since it was filled in the 1930s.

The downward march of the reservoir near Las Vegas reflects enormous strains on the over-allocated Colorado River. Its flows have decreased during 16 years of drought, and climate change is adding to the stresses on the river.

As the levels of Lake Mead continue to fall, the odds are increasing for the federal government to declare a shortage in 2018, a step that would trigger cutbacks in the amounts flowing from the reservoir to Arizona and Nevada. With that threshold looming, political pressures are building for California, Arizona and Nevada to reach an agreement to share in the cutbacks in order to avert an even more severe shortage.

“This problem is not going away and it is likely to get worse, perhaps far worse, as climate change unfolds,” said Brad Udall, a senior water and climate research scientist at Colorado State University. “Unprecedented high temperatures in the basin are causing the flow of the river to decline. The good news is that we have time and the smarts to manage this, if all the states work together.”

He said that will require “making intelligent but difficult changes to how we have managed the river in the past.”

As of Thursday afternoon, the lake’s level stood at an elevation of about 1,074.6 feet. 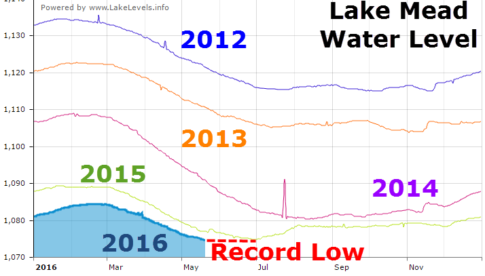 Under the federal guidelines that govern reservoir operations, the Interior Department would declare a shortage if Lake Mead’s level is projected to be below 1,075 feet as of the start of the following year. In its most recent projections, the Bureau of Reclamation calculated the odds of a shortage at 10 percent in 2017, while a higher likelihood – 59 percent – at the start of 2018.

But those estimates will likely change when the bureau releases a new study in August. Rose Davis, a public affairs officer for the Bureau of Reclamation, said if that study indicates the lake’s level is going to be below the threshold as of Dec. 31, a shortage would be declared for 2017.

That would lead to significant cutbacks for Arizona and Nevada. California, which holds the most privileged rights to water from the Colorado River, would not face reductions until the reservoir hits a lower trigger point.

Officials in Nevada, Arizona and California are working on a deal to keep water in the lake by giving up some of their Colorado River water.

The river serves about 40 million residents in seven Southwest states. Two key points are lakes Powell and Mead, the largest reservoir in the system.

Lake Mead’s high-water capacity is 1,225 feet above sea level. It reaches so-called “dead pool” at just under 900 feet, meaning nothing would flow downstream from Hoover Dam. 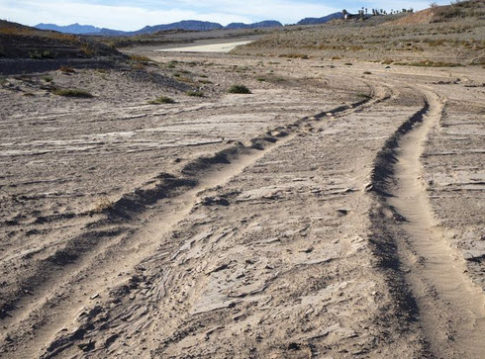 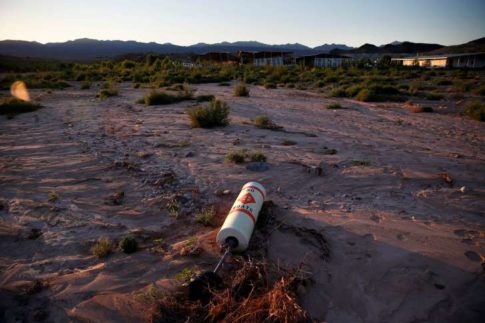 As population growth and heavy demand for water collide with hotter temperatures and reduced snowpack in the future, there will be an even greater mismatch between supply and demand, said Kelly Sanders, an assistant professor at the University of Southern California who specializes in water and energy issues.

“The question becomes how to resolve this mismatch across states that all depend on the river to support their economic growth,” Sanders said. She expects incentives and markets to help ease some of the strains on water supplies, “but it is going to be tricky to make the math work in the long term.”