Egypt Air: FAKE: Report of debris found including two seat cushions, a body part and luggage, and now I am going to slay the liars.

Pictures or it did not happen. And with photoshop available, I won’t even believe debris photos anymore after they screwed the story line this badly, let me explain – This crash would have been an easy one to find if it was real, because it would have happened in a confined area a helicopter could get to easily. They are making it all look complicated by faking the search with boats. In a location like that, you don’t use boats, you use helicopters. It is ALL FAKE. If numerous helicopters were not sent out in the first hours, it is ALL FAKE. Where are the reports of rescue helicopters being sent out, only 100 miles off shore where they could go easily?
WHAT DO YOU MEAN THERE WERE NO RESCUE HELICOPTERS IN THE FIRST HOURS? They “knew” where this plane went down, WHY NO RESCUE HELICOPTERS SENT IMMEDIATELY? WHY NO? BECAUSE THE DAMN PLANE LANDED IN ISRAEL, THAT’S WHY.
This was the bust I held onto yesterday, to nail them when they sprung the next lie. They were talking idiotic searches on boats, when the plane went down in a known location, IN THE WATER, where there would have been a high probability of survivors well within reach of the shortest of the short range rescue helicopters from 5 different countries. This would not have even needed a long range rescue helicopter. Not sending helicopters is a dead giveaway there was no crash, because sending helicopters was the only thing that would have been done if a plane really did go down. Boats would be sent later, to pick up the big pieces.
What do you do in a real scenario with possible survivors? Send a 25 mph boat and spend 5 hours getting there and then spend 10 hours plodding along at water level looking for pieces within eyeshot at water level? NO. You send a helicopter, that can get there in 25 minutes and scan the entire area in a few more minutes. X 20 helicopters and the crash is found instantly and all survivors are pulled from the water in the FIRST HOUR. How about sending a fighter jet first, that can cover 100 miles in a few minutes to tell the helicopters right where it went down, so when they arrive 15 minutes later they go right to the crash? The story line, which only involved boats is CHILDISHLY STUPID, Giligan’s island style, thank you common core, you make my job of debunking lies easy!

If the plane landed anywhere else, they would not have kept quiet about it. The three people missing from the boarding log, that dropped the passenger count from 59 to 56, (for a total of 66 aboard) are probably what this is really all about. If it was possible to find out who was deleted from the boarding log, we would probably have the answer for why this plane was really taken.

Here is another knock out bash of the official story which proves Israel has the plane:

Supposedly, a plane went down in a “terror related incident” less than 100 miles off of Israel’s coast, and ISRAEL DID NOT GO OUT AND SEE WHAT WAS GOING ON? They left it all up to an idiot on a fishing boat? Come on now, they left it ALL UP TO A “CAPTAIN” ON A SMALL BOAT, when it was according to the Israeli press, a “terror incident” that happened above waters Israel un officially claims? The story line is too stupid to buy, that is why I let them hang themselves with a “debris report” because there is no conceivable way this happened at all if Israel did not go out and check on anything.

If this was real, Israel would have sent fighter jets, reconnaissance planes, helicopters, submarines, and naval vessels because it was, after all, a “terror related incident” that happened over their own turf, and they are persnickety about terror, RIGHT?. TOO LATE FOR THAT STORY NOW, THE ZIO PRESS BLEW IT.

This plane supposedly “went down in the Mediterranean.” Not out in the middle of the Atlantic, not out in the Pacific, it went down in EVERYONE’S BACK YARD. There is no conceivable way the debris trail was not photographed clearly AT DAYBREAK. Israel, Turkey, Egypt, Russia, Italy, and many other countries could have had a fighter jet to the scene in less than an hour, and Egypt, Russia and Israel could have had one there in 10 minutes. Even helicopters could have been there in a half hour. No clear debris photos ALREADY means they are hoaxing this and Israel probably has the plane. If this was real, THE STORY SHOULD BE ABOUT RESCUE HELICOPTERS SEARCHING, NOT SOME STUPID IDIOT CAPTAIN ON A BOAT!

UPDATE: No wreckage found as reported earlier (AND OFFICIALLY CONFIRMED LATER,) AND I CAN PROVE IT. Now it looks like another MH370

UPDATE: I did not need to prove it! What I have said all along is now fully confirmed: The “officially found wreckage” was not from the Egypt air flight, it was just random styrofoam! I am confident I have this nailed below, READ IT AND WEEP ISRAEL YOU ARE BUSTED, ARCHIVE AND POST! 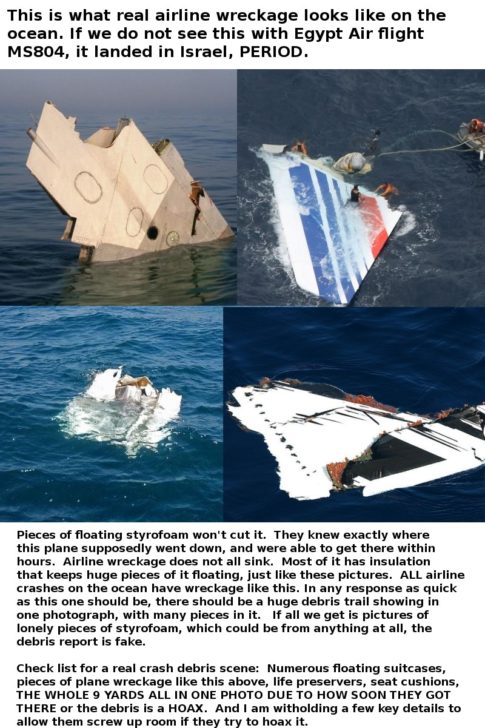 The latest reports simply have the pilots going silent, no fire ball, no debris, just a sudden change of course and drop in altitude with de-activated transponder and the same silent pilots we saw with MH370. CONCLUSION: The plane was diverted to Israel. It had no fuel to go elsewhere, and no one else could have done this. After showing a sudden turn towards Israel and sudden dive of the aircraft, the radar was blanked at around 20,000 feet, just like MH370. Unlike MH370, this plane was so close to the airport it would have been seen at less than 5,000 feet. If it disappeared from radar at 20,000 the way MH370 did . . . . . .JAMMER because the radar in the area was too close to the scene of disappearance for this to happen this time around, even if the plane fell in pieces it would have been tracked, in pieces to the water. 66 people aboard. HMMMMMMMMM . . . 66 people aboard. Down from an originally reported 69. Yep. The newly missing 3 people are probably who Israel was after. Time to find out if those 3 air marshals reported to be aboard were provided by Israeli security companies! THEY WOULD BE NEEDED TO THREATEN THE PASSENGERS AND CONFISCATE CELL PHONES AND MAKE THREATS TO PREVENT PASSENGERS FROM MAKING PHONE CALLS AFTER THE PLANE WAS FORCED DOWN IN EITHER TEL AVIV OR SOME HELL BASE IN THE ISRAELI DESERT. BINGO, I THINK WE MIGHT HAVE IT, DEBRIS TRAIL OR THAT IS THE STORY. WHY THREE AIR MARSHALS FOR 56 PASSENGERS? BINGO!!!!
Now we really need the background of the passengers aboard. If there is no debris trail (I have confirmed all the reports on debris trails are a hoax so far) and if none actually show up, the plane was forced to land in Israel, there is no other possibility. DEBRIS TRAIL OR ISRAEL, PERIOD, END OF DISCUSSION!

QUESTION: How do you revise the number of passengers and crew from 69 to 66 after the plane took off? Common core boarding log math tabulators???? How does that type of number, which is set in stone at the boarding booth get changed later? ISRAELI SHOOT DOWN, OR ISRAELI ELECTRONIC HIJACKING, that’s how. The missing 3 people ARE WHO THEY WERE AFTER.

LET’S SEE THE CRYSTAL CLEAR DEBRIS TRAIL AND RECOVERED BODIES TO PROVE THE ABOVE IS NOT TRUE!

Original early report follows, for as long as no credible wreckage or bodies are found, the above is what I am going with, but here is the initial report, which was based on early reports which now appear to be inaccurate:

The lack of response from the pilots, and the flight pattern of the aircraft as it crashed strongly indicates a missile strike to the nose of the aircraft. If it was a bomb in the cargo hold or cabin, the pilots could have still talked as the plane broke up, and the breakup would have been faster. This breakup involved a 90 degree turn and a full 360 degree turn. This means the wings were still on the plane, and enough time passed for the pilots to radio a distress call. Lack of this proves a hit to the cockpit. Obviously “Islamic terrorists” are going to be blamed, (and already are) but this is most probably an Obama, Clinton and Nut Yahoo production due to the altitude and location of the event, and the difficulty of getting a missile as high as the plane was flying. Only a missile could have done this. Easily accomplished from Israeli airspace.
And remember, it is still an “act of terror” if Israel does it. Trump could be totally right about the “terror” angle, and totally wrong about who actually did it.
Hoax news sites are reporting ISIS responsibility and muddying the waters. Everything still points to missile strike by Israel. This is not a “bomb in the cabin” type incident, which would have given the pilots time to radio out. They were in contact with the ground when this happened, said nothing about anything, and vanished. That equals missile strike to the cockpit and in that area, only Israel or the Egyptian government could have done it and I seriously doubt Egypt doing this. Who was aboard this aircraft? Same old important question . . . . .

2 thoughts on “Another MH370 – Egypt Air: FAKE: Report of debris found including two seat cushions, a body part and luggage, and now I am going to slay the liars.”