– China Furious After US Launches Trade War “Nuke” With 522% Duty:

Now that China’s brief infatuation with “rationalizing” excess capacity in its massively glutted (and insolvent) steel sector is over after lasting all of 2-3 months, China is back to doing what it did in late 2015 (and what it has always done) when as we reported, a surge in Chinese exports led to the first salvos in the trade war between China – the world’s biggest exporter of various steel products and is responsible for half the entire world’s steel output – and countries who are importing dumped Chinese products at the expense of their own steel and mining industries.

Nowhere has this trade tension been more obvious than in the UK, where in recent months angry, protesting steel workers have been demanding rising protectionist steps against a country they, rightfully, see as unleashing a global commodity deflation driven by out of control, and unprofitable by highly subsidized, production by Chinese steel mills.

The US was not left unscathed: we reported in December that “The Trade Wars Begin: U.S. Imposes 256% Tariff On Chinese Steel Imports” and since then things have progressively turned worse, finally culminating overnight with an outburst of anger from Chinese officials who, after attempting to flood not just the US but also the entire world with their commodity in general and steel in particular, exports… 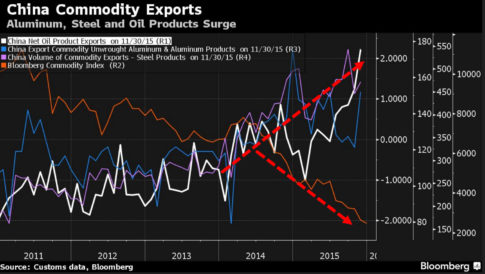 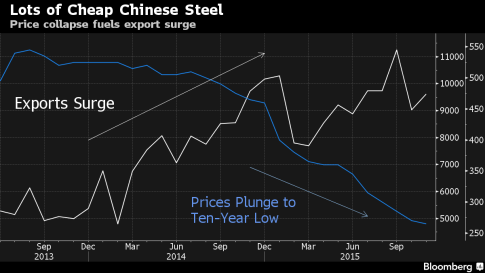 ….  have criticized U.S. anti-dumping penalties imposed on Chinese steel amid mounting complaints Beijing is exporting at improperly low prices to clear a backlog at home.

The numbers, however, do not lie and confirm that China is engaging in massive global commodity dumping.

Chinese exports hit a record 112 million tonnes last year, with rivals claiming that Chinese steelmakers have been undercutting them in their home markets. According to Reuters, in the four months to April, China’s steel exports have risen nearly 7.6% to 36.9 million tonnes.

In some regard, China has reason to be angry: the US unleashed what is nothing short of a nuclear bomb in its rapidly escalating trade war with China, and recently imposed duties of 522% on cold-rolled steel used in automobiles and other manufacturing,  In doing so it has rendered Chinese exports to the US unsustainable and will force even more excess Chinese production to remain landlocked within China’s borders, making the domestic glut, and price collapse, that much worse.

On the other hand, the only reason the US is forced to unveil such unprecedented protectionist measures (we wonder how the “impartial” WTO will argue that US trade practices are fair) is because of China’s own capital misallocation which, however, unlike in the US where the capital markets are a perpetual store of newly printed money, in China those $30 trillion in deposits ultimately end up allocated toward fixed investment. The result is the current historic plunge in Chinese commodity prices (now that the recent bubble has burst) and the unleashing of even more exported, quite literally, deflation.

Sure enough, as AP reports, Beijing faces mounting criticism from the United States and Europe over a flood of low-cost steel that Western governments complain hurts their producers and threatens thousands of jobs.

The Chinese government is trying to shrink bloated industries including steel, coal, cement, aluminum and solar panel manufacturing in which supplies exceed demand. That has led to price-cutting wars that are driving producers into bankruptcy. It is also leading to mass layoffs, and is why in recent months the government decided to, far less publicly, stop shrinking its bloated industries and revert to the old and broken model, one which lead to the export surge in the first place.

The result has been immediate: the latest U.S. duties include 266% for anti-dumping and 256% to offset what investigators concluded were improper subsidies, for a grand total of over 500%!

As noted previously, China is furious. The Commerce Ministry complained regulators engaged in “unfair practices” and improperly hampered the ability of Chinese companies to defend themselves but gave no details.

“There’s too much trade friction and it’s not good for the market,” Liu Zhenjiang, secretary general of the China Iron and Steel Association told Reuters when asked if China will appeal U.S. anti-dumping duties at the World Trade Organization. While a flood of cheap Chinese steel has been blamed for putting some overseas producers out of business, China has denied its mills have been dumping their products  on foreign markets, stressing that local steelmakers are more efficient and enjoy far lower costs than their international counterparts.

“High taxes are unfair …. China doesn’t have a large market share in the United States,” Zhang Dianbo, deputy general manager at Baosteel Group, said recently during a Singapore conference. Mr. Dianbo may be interested to know that creating $1 trillion in new loans in the first quarter as China did, is also to some, “unfair” as all that money goes to subsidize insolvent industries, and results in the export glut that is the heart of the problem.

To be sure, China at least tangentially acknowledged that it was the cause of the problem: a surge in Chinese steel prices helped restart once-shut mills, and might slow Beijing’s bid to address excess capacity, said Baosteel’s Zhang. “The price rebound is not beneficial to the overcapacity situation…. It will delay the shutdown of (inefficient) capacity,” he said.

Steel prices have come off around a quarter since their April peaks and could weaken further in the second half of the year, but Zhang said they were unlikely to return to recent lows.

We disagree, and so do US steel producers who are relying on Washington to do everything in its power to prevent a price collapse.

Washington was responding to a 2015 complaint by five steel producers that said they have been forced to lay off thousands of employees due to unfair foreign competition. One of the producers, United States Steel Corp., filed a separate complaint last month accusing the biggest Chinese steel producers of conspiring to fix prices, stealing trade secrets and skirting duties on imports in the U.S. with false labeling.

Life for China’s exporters is only going to get more difficult: the European Union launched its own investigation of Chinese steel exports last week following protests by steelworkers. In Britain, Tata Steel cited low-cost Chinese competition when it announced plans last month to sell money-losing operations that employ 20,000 people.

And just to assure that this is nowhere near the end of the ongoing trade wars, China pushed back against its trading partners in April, announcing anti-dumping duties on steel from the European Union, Japan and South Korea.