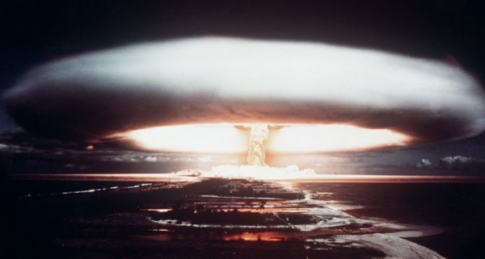 – British General Says A Nuclear War With Russia In 2017 Is “Entirely Plausible”:

With tensions between Russia and the West at post-cold war highs, a former NATO deputy military chief is now saying that a nuclear war with Russia over the Baltic nations in 2017 is “entirely plausible” according to RT.

General Sir Richard Shirreff, from Britain, served at the second highest NATO military office in Europe between 2011 and 2014, has written a fictional book about a nuclear war with Russia in 2017 triggered by a dispute of the Baltic nations. While the story is indeed fictional, Shirreff said the story is based on an “entirely plausible” scenario.

The scenario in which Shirreff lays out is that Russia would first occupy Ukraine to secure a land route to Crimea and then invade the three Baltic nations, all of which are members of NATO. Shirreff claims Russia will do this because it feels that NATO is perceived as weak, and Russia will be oppositional about what it sees as the alliance’s attempt to encircle it.

The general’s thesis is hard to disagree with of course. As NATO has recently moved 4,000 troops to Russia’s border, followed by the US turning on the missile defense system and immediately wargaming in Romania, the scene has already been set for such an occurrence. Russia has responded to NATO’s troop positioning by creating new military divisions of their own, and deploying them to the borders.

Even more to Shirreff’s point, as we noted a few days ago, Russia has already hinted at nuclear war in response to the US activation of the missile defense system in Romania. Last fall, as Russia grew concerned that the defense system would take away its first mover advantage of being able to strike in the event of a war, Russian security officials hinted that one miltary response would be to use a nuclear-armed drone submarine that would be detonated in coastal waters, causing a radioactive tsunami to flood and contaminate seaside cities. The purpose would be to “defeat important economic objects of an enemy in coastal zones, bringing guaranteed and unacceptable losses on the country’s territory by forming a wide area of radioactive contamination incompatible with conducting military, economic or any other activities there for a long period of time.” In fact, Russian commentator Konstantin Bogdanov wrote that the antimissile sites in Eastern Europe might even accelerate the slippery slope to nuclear war in a crisis.

All that’s left is a catalyst, something the US is apparently trying desperately to deliver as it continues to fly spy planes over Russia’s border, and encircles Russia with troops. If ever either side were to make one small mistake in how they choose to interact with each other, it could very well lead to nuclear war.