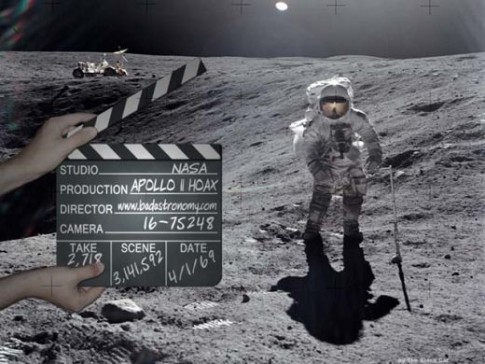 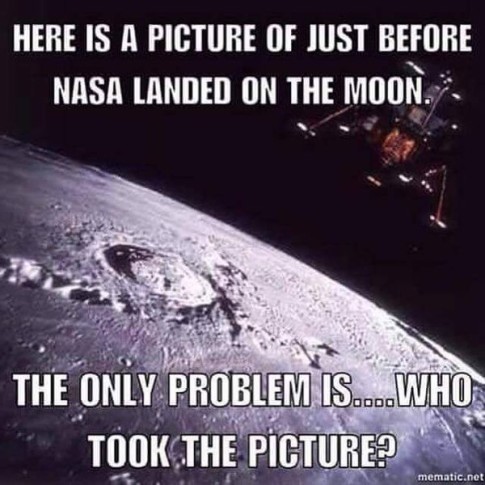 – I like velcro and used to drink Tang, but about the moon, was NASA really full of horseshit?:

I remember being home on leave from Vietnam and watching the President on television.
He was telling Americans that US forces were not operating in Cambodia.
The US Army had taught me well how to use a compass and a map.
I had just been operating in Cambodia for many weeks.

There are many conspiracy theories about the moon landing, but this article deals only with mine, personally, which is a math problem I need your help to solve. We have some smart people on zerohedge, and access to much better computers than they had in the 60’s.  We should be able to do the math.

I have sat in a Lunar Lander, a few years back in Houston, before NASA hung it way up high on the ceiling, where you cannot get close to it.

It is tiny, especially considering that it is a two-stage space craft, with two separate and complete engines.

The lower stage, below the landing legs’ top attachment points, is covered in foil (why foil I do not know).  It houses one of the Lunar Lander’s two main rocket engines and the fuel to decelerate the spacecraft from orbital speed (____velocity), and then to land the space craft and its payload (____ mass) gently on the moon without injuring or killing the two government workers inside, unlike these objects.

The upper stage, housing the two aforementioned government workers, also contains a second complete rocket engine, and its fuel, (____ mass).  It separates from the lower stage and accelerates back up into lunar orbit. 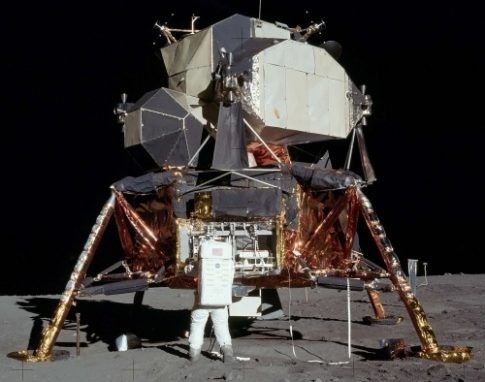 I examined the size of the ascent and descent engines, as well as the size of the alleged fuel storage.  It seemed to both me and my kids, intuitively, to be less than credible, even considering that the moon’s gravity is 1/6 of the Earth.  Our doubts were reinforced by the massive size of the Saturn V rocket on display, which is described as a giant flying fuel tank.

The size of the lunar lander is of course limited by the fact that they had to fit it in the top of a Saturn V rocket and get it into orbit, along with the Command Capsule and Service Module.

I will concede the fact that they got it up into Earth orbit.  Sure.  There were plenty of eye witnesses at Cape Kennedy.

But down to the moon’s surface, landing soft enough to not injure or kill the astronauts, and then back up into lunar orbit?  Come on!  What was Kennedy thinking?  There is no atmosphere on the moon to brake against.  That requires a lot of fuel.  No?  The little toy-sized Mars Rovers supposedly bounced along forever even with an atmosphere, parachute, and retro rockets.

Here is the math problem:

How much fuel, really, and how big would the fuel storage really need to be, for each of the two lunar lander stages ____ cm2?   Do these amounts really fit into the space of the fuel vessels shown here.

Remember, there is no margin for error, as there are two lives at stake, and the credibility of the United States government.  Show your work.

Unfortunately, we really need to do this math, because NASA erased or lost the original film from the surface of the moon, so we cannot use modern analysis on the original high-resolution 2 1/4″ negatives, and the eye-witness government workers that allegedly landed on the moon cannot be trusted, considering that they all live in multi-million dollar homes (I have personally been in one in the foothills of Colorado SW of Denver) and they have received big-fat government paychecks over the last 50+ years, not to mention their credibility as people.

Also, nobody has landed a man softly on the moon and returned him, again, in almost 50 years, with much better technology. What do we call a scientific experiment that is not repeatable by others?

Finally, the amazing Hubble space telescope that is really just a re-purposed spy satellite, is supposedly unable to see the objects that we allegedly left on the moon, like the moon car, but yet we can read the license plate of cars on Earth, through a thick atmosphere.

Any takers that are not NASA employees?  I will trust a Wall Street quant before I trust a government employee.  It’s not like this is rocket science. 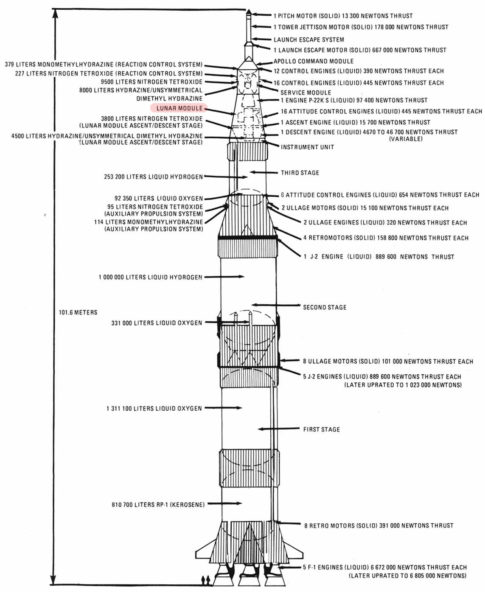 2 thoughts on “I like velcro and used to drink Tang, but about the moon, was NASA really full of horseshit?”