Movement in the autonomous vehicle space accelerated once again.

Otto, which is based in San Francisco, currently has around 40 employees, some of whom previously worked at Apple, Tesla, Cruise Automation and Here Maps. Although the company was formed in January, the LinkedIn profiles of three of Otto’s four founders still show them working at Google.

Otto, which came out of stealth today, is less interested in brand new trucks than in the estimated 4.3m big rigs already on American roads. Otto has already bought and retro-fitted three Volvo cabs with lidar, radar and cameras, and driven a handful of fully autonomous miles?—?without even a safety driver?—?on the highways of Nevada.

BackChannel: Why commercial transport? Is there anything more old school than a tractor-trailer rig?

Lior Ron: Because of federal regulations, a truck can only drive 11 hours a day today with a single driver. After 10 hours, the accident rate goes exponentially higher. If we can make it drive safely 24/7, more than doubling its capacity and utilization, that’s a very strong financial argument.

BackChannel: I’m guessing that navigating state and government regulations will be a big part of Otto’s future.

Lior Ron: The Department of Transportation and a lot of other great folks are getting involved in bringing the right regulations. And in many states outside of California, there are no specific regulations either way, which means that it’s actually legal to drive and test autonomous vehicles on many roads. We’re going to continue our testing with urgency but also work with regulators and other bodies to show we can have a truck drive itself more safely than a truck driver, all of the time.

BackChannel: But your technology will only work on highways?

Lior Ron: That’s right. There are only 222,000 miles of highway in the US, just 5% of the roads in the country. They’re easier to map and it’s a much more constrained problem to solve than all those city and rural streets. There are no pedestrians or traffic lights but you do drive at high speeds and you do need to see far ahead.

We’re optimizing for this kind of driving, with sensors mounted up on the cabin for a much higher vantage point. For now, all the technology is on the tractor but we might add some components to the trailer in the future.

BackChannel: When will we see the first driverless truck carrying a commercial cargo?

Lior Ron: We have the basic technology in place and are already testing it on public roads. We want to demonstrate a cargo route in the foreseeable future, to show that our technology is commercially viable. We are fully funded by employees, who came together to enjoy this and get there as soon as possible. The approach and the team we put together have the ability to do that very fast.

Driverless Trucks On the Road

On February 16, I reported that a reader saw a Nevada truck that was completely driverless. I believed the reader.

Comments from skeptical readers were amusing:

TZ said: “Snap a picture next time. Bat boy and the area 51 aliens aren’t very tall, so maybe one of them was driving – apparently aliens can get CDLs.”

Mesomorph said: “Boy I can’t wait for driverless trucks. I’ll just cruise the open highways until I spot a promising one. Me and the crew will slow to a stop in front of the truck and it will have to stop. The target truck won’t be able to reverse because we will back a truck up against it while we throw the goods into our truck. We will be gone in less than a minute. Consider yourselves lucky if we don’t set it on fire to cover our tracks.”

Mark said: “You can stop a driverless truck by putting a traffic cone on the road. Do that on both sides of the highway and the police will be blocked by the traffic jams created. A few miles of stopped traffic can disrupt the economy of an entire city. Yeah, driverless vehicles are a great idea. No problems there at all.”

Rich said: “Hyperventilating a wee bit here, possibly? I know you’re big on anticipating the job losses likely associated with the adoption of driverless trucks, but it does not help your case to make far-out conspiratorial claims of secret driverless truck tests.”

Les Francais said: “Last week in my country, the main Telco lost all GSM voice and data virtually country wide for two hours. Millions of services were affected including control systems which have gone over to GSM technology. Technology relying on GSM, GPS and radio has gone too far.”

Justaned said: “I-80 does NOT cross Nevada. I do believe the internet has bamboozled you on this one.”

Mesomorph commented again: “So you are talking about adding hardware, software, bandwidth and a control center staffed by humans. Sounds awfully expensive for something that a couple bursts from my paintball gun will render completely useless. If police respond every time a truck comes to an unexpected stop they will be overwhelmed. If they are not I will make sure they are. Mish, I know you are a busy guy but I expected more from you than to say I have no faith or vision. I have faith that most humans are just greedy, opportunistic primates. Saying that some smart people will have enough of my tax dollars to create driverless trucks is no vision. I have put forward my vision. Now how are you going to stop me?” 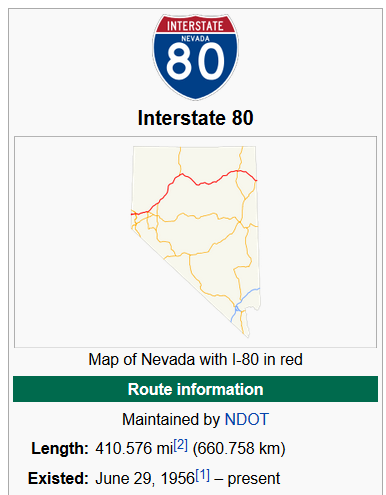 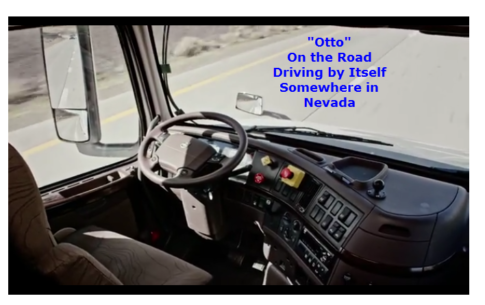 I have been sharing emails with reader “Vooch” for a few weeks. He thinks autonomous trucking will happen by 2018. I thought he was a little early, citing a need for enough trucking hubs.

Otto precisely fits in with the hub solution I proposed several years ago.

Drivers take trucks from the warehouse to the hub. The truck drives itself to the next hub. Then a short-haul driver takes the truck the last mile.