“The argument that we would be less secure if we left the EU, is in reality rather difficult to make. There would in fact be some gains if we left, because the UK would be fully master of its own house…The stakes are very high, and the UK referendum is the first roll of the dice in a bigger geopolitical game.”

None other than the former head of MI6 (the British Secret Intelligence Service) Richard Dearlove expressed his quite candid thoughts on the immigration crisis, as well as the possibility of a British exit from the EU during a speech recently at the BBC. The speech is well worth the listen.

Here are some notable quotes from the speech as it relates to the immigration crisis. The former head of intelligence is quick to point out that despite what the public perception may be, the reality is that there are terrorists already among us.

“When massive social forces are at work, and mass migration is such a force, a whole government response is required, and a high degree of international cooperation.”

“In the real world, there are no miraculous James Bond style solutions. Simply shutting the door on migration is not an option. History tells us that human tides are irresistible, unless the gravitational pull that causes them is removed. Edward Gibbon elegantly charted how Rome, with all it’s civic and administrative sophistication and military prowess, could not stop its empire from being overrun by the mass movement of Europe’s tribes.”

“We should not conflate the problem of migration with the threat of terrorism. High levels of immigration, particularly from the Middle East, coupled with freedom of movement inside the EU, make effective border conrol more difficult. Terrorists can, and do exploit these circumstances as we saw recently in their movement between Brussels and Paris, and to and from Syria. With large numbers of people on the move, a few of them will inevitably carry the terrorist virus.”

“A number of the most lethal terrorists are from inside Europe, including the UK. They are already among us.”

“The EU, as opposed to its member states, has no operational counter-terrorist capability to speak of. Many of the European states look to the UK for training.”

Dearlove also touched on the topic of a British exit from the EU, delivering some very interesting comments around just how much can the EU be trusted to guide everyone’s collective future.

“The argument that we would be less secure if we left the EU, is in reality rather difficult to make. There would in fact be some gains if we left, because the UK would be fully master of its own house. Counter-terrorist coordination across Europe would certainly continue, and the UK would remain a leader in the field. The idea that the quality of that cooperation depends in any significant way on our EU membership is misleading.”

“Is the EU, faced with the problem of mass migration, able to coordinate an effective response from its member countries. Should the UK stay in and continue struggle for fundamental change, or do we conclude that the effort would be wasted, and that the EU in its extended for has run its historical course. For each of us, this is possibly the most important choice we may ever have to make.”

“Whether we will each be worse off, whether our national security might be damaged, even whether the economy might falter, and sterling be devalued, are subsidiary to the key question, which is whether we have confidence in the EU to manage Europe’s future. If Europe cannot act together to persuade a majority of its citizens that it can gain control of its migrant crisis, then the EU will find itself at the mercy of a populist uprising which is already stirring. The stakes are very high, and the UK referendum is the first roll of the dice in a bigger geopolitical game.“

It was refreshing to hear Dearlove, a quite credible source, deliver a little truthiness regarding just how “necessary” the EU is to its members. What’s curious however, the comment “first roll of the dice in a bigger geopolitical game.”What exactly does that mean, and what else is afoot that has not yet been shared with the public?

Additionally, here is the migrant paths and number of migrants detected in 2014 and 2015. 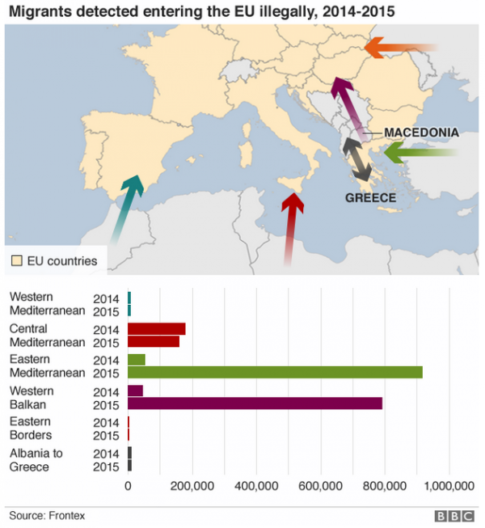 And here is where the asylum seekers have clustered… 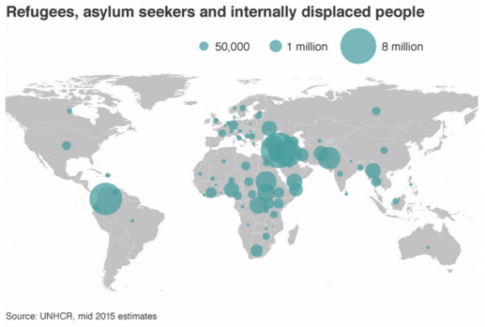