In retrospect, Obama’s intervention in Libya was an abject failure, judged even by its own standards. Libya has not only failed to evolve into a democracy; it has devolved into a failed state. Violent deaths and other human rights abuses have increased severalfold. Rather than helping the United States combat terrorism, as Qaddafi did during his last decade in power, Libya now serves as a safe haven for militias affiliated with both al Qaeda and the Islamic State of Iraq and al-Sham (ISIS). The Libya intervention has harmed other U.S. interests as well: undermining nuclear nonproliferation, chilling Russian cooperation at the UN, and fueling Syria’s civil war.?

As bad as Libya’s human rights situation was under Qaddafi, it has gotten worse since NATO ousted him. Immediately after taking power, the rebels perpetrated scores of reprisal killings, in addition to torturing, beating, and arbitrarily detaining thousands of suspected Qaddafi supporters. The rebels also expelled 30,000 mostly black residents from the town of Tawergha and burned or looted their homes and shops, on the grounds that some of them supposedly had been mercenaries. Six months after the war, Human Rights Watch declared that the abuses “appear to be so widespread and systematic that they may amount to crimes against humanity.”?

As a consequence of such pervasive violence, the UN estimates that roughly 400,000 Libyans have fled their homes, a quarter of whom have left the country altogether. ?

– From the post: The Forgotten War – Understanding the Incredible Debacle Left Behind by NATO in Libya

Earlier today, The Guardian published an article detailing how foreign leaders were gathering in Vienna to discuss how to address the humanitarian disaster/ISIS haven they themselves created in Libya. As usual, the key agenda item revolved around whether the U.S. and its allies should ship weapons into the arena to inspire, you know, freedom and democracy. 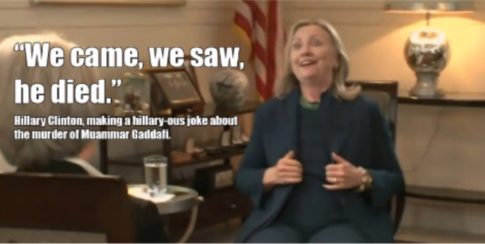 Reading the piece leaves you with a clear sense of what a quagmire it really is. For example:

Leading foreign ministers from Europe and the Middle East are to meet in Vienna on Monday under the joint chairmanship of the US and Italy to discuss how to bolster support for the UN-backed Libyan government in the face of deepening splits in the country over political legitimacy, oil resources and Islamic State.

Special forces from the US, UK, France and Italy are operating in various parts of Libya, sometimes backing different military forces and hindering efforts to reunite Libyan politics behind the UN government of Fayez al-Sarraj.

Remember this paragraph for later.

Sarraj has been trying to broaden his authority in Tripoli since he and his political allies arrived in late March, taking over key institutions such as the central bank and the National Oil Corporation, but he still faces a rival administration, and military power, in the east. Disputes between the factions are such that bankers on one side are depriving the other access to the code to a bank vault containing badly needed cash to pay staff. Different groups are also trying to export oil.

Officials say that at the Vienna meeting on Monday, which will be held under the joint chairmanship of the US and Italy, the fledgling Tripoli administration is likely to submit a list of requests for western partners to assist its forces with arms, training and intelligence. The meeting will be chaired by the US secretary of state, John Kerry, and the Italian foreign minister, Paolo Gentiloni.

The Libyan government – the putative Government of National Accord (GNA) – has struggled to take hold because a minority of the House of Representatives – the Libyan parliament – has refused to provide its backing, leaving the government without the majority required.

In a further complication some western-backed countries, notably the UAE and Egypt, are backing a bigger role for the rival forces of General Khalifa Haftar’s Libyan National Army based in the east.

In a new development the rival military factions from east and west claim to be gathering forces to take on Isis at its base in Sirte on the Libyan coast, but there are fears that they will end up fighting each other.

Fortunately, a fleeting voice of sanity emerged from the wilderness.

But in a country overflowing with arms, some argue that lifting an embargo is unwise.

Before the summit, Mattia Toaldo, a policy fellow at the European Council on Foreign Relations, urged the west to hold back from focussing on military solutions. He said: “Europeans now have what they asked for, namely a unity government ruling from the capital. They should take care not to burden it with unrealistic demands, from ending the migrant crisis to defeating Isis. Instead, the west should work to strengthen the government’s political control over the country.”

Good suggestion, but I think we’ll pass. As Bloomberg reports, prepare to open the weapons floodgates…

U.S. Secretary of State John Kerry backed providing weapons to Libya’s unity government to assist in the fight against Islamic State and other jihadist groups, a move endorsed at a meeting of top diplomats of nations from Italy and the U.K. to Russia and Saudi Arabia.

The idea “makes sense,” Kerry said after talks in Vienna with the head of the unity administration, Fayez al-Sarraj, and representatives of more than 20 nations. Sarraj said his Government of National Accord would supply the United Nations with a list of weapons it needs “as soon as possible.” The UN would have to provide exemptions to an arms embargo before weapons could be shipped.

The envoys met in the Austrian capital to discuss ways to bolster Sarraj’s UN-backed government, the most significant attempt so far to end the violence that has fractured Libya since the ouster of former leader Muammar Qaddafi in 2011. But Sarraj has yet to win the support of powerful armed factions based in Libya’s east, which are contesting control of the crucial oil industry.

Gotta love the media. They make is sound as if Libya just stumbled into its current situation via some freak historical accident. In reality, we know the whole thing is essentially the handiwork of Presidential candidate, and neocon warmonger extraordinaire, Hillary Clinton.

For more, see: “We Came, We Saw, He Died” – Revisiting the Incredible Disaster That Is Libya

“It is imperative to put the international community’s full weight behind the Government of National Accord,” Kerry said. “It is the only way to ensure that vital institutions such as the central bank and the national oil company, that they fall under representative and acknowledged authority.”

The central bank and Libyan oil. At least he’s honest about what matters.

The unity government was formed under a UN-mediated peace deal last year. The agreement is backed by Western allies as the only way to stem spiraling unrest that has plagued the North African nation and enabled Islamic State to expand along the southern Mediterranean coast.

Once again, Bloomberg acts as if this unrest just spontaneously erupted out of nowhere.

Italian Foreign Minister Paolo Gentiloni, who joined the gathering of diplomats at the roughly three-hour meeting in Vienna, ruled out a wholesale lifting of the UN arms embargo but said humanitarian aid and weapons could help Sarraj’s government bring stability to the country.

Speaking at the briefing with Kerry and Sarraj, Gentiloni also ruled out putting “boots on the ground” in Libya, while pledging support in “several security dimensions.”

“The international community stands ready and the U.S. stands ready to provide humanitarian, economic and security support,” said Kerry, who added that nobody is talking about inserting troops into the conflict.

What a relief. At least Kerry and Gentiloni are promising no boots on the ground! There’s just one minor problem. Recall what we learned from The Guardian article earlier. Yeah that’s right, this…

Special forces from the US, UK, France and Italy are operating in various parts of Libya, sometimes backing different military forces and hindering efforts to reunite Libyan politics behind the UN government of Fayez al-Sarraj.

So not only are there already Western boots on the ground, but these boots are fighting each other.

Even better, we don’t have to go back to The Guardian article to point out the obvious Kerry “no boots” lie. It’s right there in next paragraph of the same Bloomberg article…

Pentagon spokesman Peter Cook told reporters in Washington on Monday that “small teams of U.S. forces” already have gone into Libya to gather intelligence on the ground about Islamic State forces expanding their foothold in the country.

“If Syria and Iraq would end tomorrow, then Libya would definitely be No. 1” for Islamic State, he said. “Libya is very much already a hub.”

Yes, America, they really do think you’re that stupid. They think you’re such schmucks, you’ll still vote for Hillary despite the fact that she was the driving force behind the Libya intervention while Secretary of State.

If you want to know what a Hillary presidency will look like, just take a look at Libya.

This, ladies and gentlemen, is a sociopath in action: