One of the more closely watched 13F reports yesterday in addition to that of Warren Buffett was that of Soros Fund Management, the family office of George Soros, which revealed that while the 85 year old billionaire was not quite as bearish as his former chief strategist Stanley Druckenmiller, or Carl Icahn for that matter, had turned decidedly sour on overall equity exposure.

As shown in his 13F, Soros slashed his overall long equity holdings by over 25% to just $4.5 billion as of March 31, which was the lowest such position since 2013. 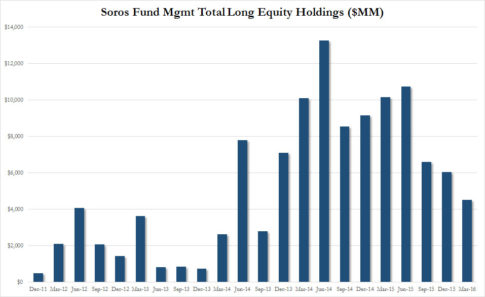 As previously discussed, Soros has warned of risks stemming from China’s economy, arguing its debt-fueled economy resembles the U.S. in 2007-08, before credit markets seized up and spurred a global recession. In January, the former hedge fund manager said a hard landing in China was “practically unavoidable,” adding that such a slump would worsen global deflationary pressures, drag down stocks and boost U.S. government bonds.

Perhaps that is also why in addition to slashing his bullish bets, Soros also more than doubled his SPY puts to 2.1 million shares, or a value of $431MM, up from $205MM the previous quarter.

But more notably was Soros’ significant return to gold, after he acquired 1.7% of Barrick, making it the firm’s biggest U.S.-listed holding. This marks a prominent return to gold for Soros, who dissolving his stake in Barrick in the third quarter of last year.

Soros also disclosed owning call options on 1.05 million shares in the SPDR Gold Trust, an exchange-traded fund that tracks the price of gold. It was unclear if Soros has been influenced by Druckenmiller who earlier this month at the Sohn Conference, called gold his largest currency allocation as central bankers experiment with the “absurd notion of negative interest rates.”