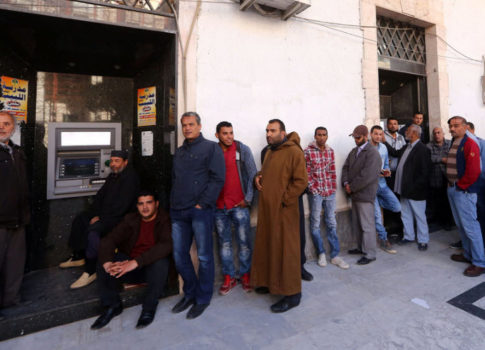 Libyans waited to withdraw money from an ATM. A currency shortage has roiled the country, which is struggling with an Islamic State insurgency

– Libya’s Central Bank Has $184 Million In Gold In Its Vault… It Just Doesn’t Know The Combination:

Now stop imagining and take a look at the situation in Libya, where the central bank chief sits in Eastern Libya, while the headquarters is further West in Tripoli, and despite Tripoli sending $23.5 million each month to Eastern Libya, it’s only a fraction of what central bank governor Ali El Hibri says is needed to pay the bills ($257 million to be exact).

The situation becomes even more strange when the fact that Eastern Libya actually does have a significant amount of gold and silver that it could use to sell and convert to cash, but it’s in a vault that requires a five-number access code that nobody seems to have. Nobody that is, except for El Hibri’s counterparts in Tripoli that is, and they won’t give the code out.

Such is life now in Libya since Muammar Gaddafi was captured and killed in 2011. Eastern and Western Libya is divided into two rival governments, and even the central bankers aren’t working together to solve issues.

It’s alleged that the vault has roughly $184 million worth of gold and silver within its walls, and El Hibri isn’t going to wait for his colleagues in Tripoli to have a change of heart before he can get to it. While El Hibri waits for a shipment of fresh currency from a foreign printing house to come in, totaling close to $3 billion, the central bank chief has tasked a pair of safe crackers, consisting of one engineer and one locksmith, to break into the vault and retrieve the coins.

Although the coins apparently have Gaddafi’s face on them, El Hibri has already worked a solution to that little issue by already agreeing to liquidate the treasure through gold and silver merchants provided they melt Gaddafi’s likeness off. 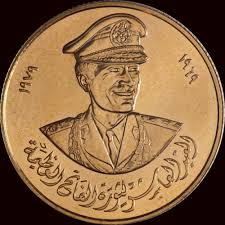 The gold and silver coins were minted in 1979 to commemorate the 10-year anniversary of Gaddafi’s rise to power. One side depicts the Italian-built colonial-era fortress in the southern city of Sabha where Gaddafi gave his first speech announcing his rule over the country. The flip side depicts a bust of the dictator wearing his colonel’s cap and military uniform. “The Great Arab Libyan Populist Socialist Republic,” is etched onto the gold and silver coins. They weigh 16 and 28 grams, respectively.

Central bank officials in Tripoli won’t comment on the matter according to the Wall Street Journal, but they have previously expressed outrage at sending money to the Eastern government, which in turn uses some of the funds to pay local militias that are acknowledged to be hostile to the Tripoli administration.

Not only are El Hibris central bank counterparts concerned about how money is used by the East, the locals have a healthy bit of skepticism as well.

“We don’t trust the authorities with the gold. We’re worried they’ll steal it.” said Waleed al-Hassi, a medical technician who said he hasn’t been able to collect his public salary since November due to the cash shortage. Waleed is now having to moonlight as a taxi driver on the side to make money.

The plan as it stands, is for the safe cracking duo to get beyond the first wall protecting the vault, then drill a 16-by-16-inch opening into the concrete wall so that the team can wedge themselves in and access the double doors. As far as the code, the locksmith portion of the duo plans to use “special techniques” in order to break into the 48-year old British-made vault.

All we can say is that nothing surprises us anymore in this upside down bizarro world we live in. Actually no, we take that back, we are surprised that the Fed hasn’t secretly extended a lifeline to the Libyan central bank, yet. After all, it is no stranger to quietly bailing out other banks.