– Reader Asks “What Will Happen When Robots Take Our Jobs”:

Reader Peter is concerned about the future of jobs, living wages, and displaced workers in a robotic society.

Specifically, Peter asks “how do you think the evolution of robotics will play out?”

At dinner with friends last evening, we discussed the idealistic thought that robots could one day serve the needs of mankind, allowing us to pursue our interests as we want, without the heavy constraint of having to work to sustain our existence.

I cannot imagine myself not wanting to build and achieve things. But it sure would be enabling if I could choose where I put my efforts based on my personal set of priorities.

While discussing this topic, I realized that as robotics enter our society, socialism would probably be friendlier as to what happens to displaced workers than would capitalism.

What happens if jobs that provide a living wage shrink faster than population growth? Is that a realistic and likely possibility?

I can only imagine that the profits reaped by robotics in a capitalistic system would have no intrinsic vested interest in what happens to these people.

There are strong forces in our capitalistic society that do not welcome the idea and/or cost of a broad social safety net, especially if it were to provide the equivalent of a living wage.

I don’t see a natural path in capitalism where robots working for mankind would free us to pursue our personal interests.

How do you think the evolution of robotics will play out?

No one knows how this will play out.

Regardless, paying people to do nothing, so that people can pursue personal interests is certainly not the answer.

Such actions would encourage people to have more kids for which there are no jobs. That’s clearly an unsustainable model.

If technology does not create jobs, then war is a distinct possibility.

But over the long haul, technology has always created jobs. Why is it different this time?

Unbridled Capitalism Not the Problem

Unbridled capitalism is not the problem. Some will even ask “when has it been tried?”

Yet, the advances in technology that capitalism has provided gives us more leisure time than ever before, despite increasing government interference in the free markets.

We can do more things in more places than any generation in history. We can fly or drive to the Grand Canyon to hike; we can communicate with nearly anyone in the world using Skype, for free; we live longer despite eating unhealthy.

All of these things are because of capitalism, not communism, not socialism.

If you hand out a living wage for doing nothing, the amount it takes will escalate rapidly.

Central bank actions are the key problem. They are hell bent on inflation.

Thanks to the increased productivity that stems from technology (which in turn stems from capitalism), people today live like kings compared to a few generations ago.

Not only that, but US citizens live twice as long as they did in 1850. 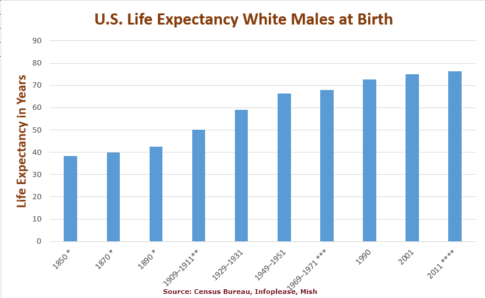 The “living wage” would be much, much lower if government and the Fed got out of the way!

Everything government touches drives up costs. And the Fed comes along and wants to drive up costs further. It’s no wonder that “living wages” keep rising.

Rather the problems we face are the direct result of Fed sponsored inflation, corporate and military fascism, government interference in the free markets, and socialist-sponsored wealth redistribution schemes.

If we let things be, “unbridled” capitalism would take care of things, if not quite nicely, then certainly better than any socialistic or government-sponsored solution.

1 thought on ““What Will Happen When Robots Take Our Jobs””