“The US Environmental Protection Agency and the Washington State Department of Health agree that radiation from naturally occurring radon was measured on an EPA monitor,” the EPA statement reads.

“The scientists determined that the cause was a temporary elevation of radon levels from the natural decay of certain types of elements found in nearly all rocks and soil.” 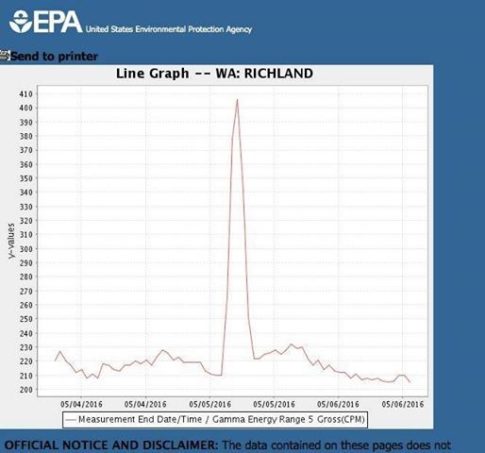 The statement also stresses that the spike in radiation could not have been due to emissions from Hanford because the wind was blowing from the opposite direction at the time the measurements were taken.

“The Department of Health said that was not possible because the wind was blowing the wrong direction for the radiation to have come from Hanford at the time the reading was taken,” the EPA notes.

Yet RT America correspondent Alexey Yaroshevsky compared the graph of the radiation readings to wind maps provided by the US national weather service and discovered that the EPA’s findings may not be entirely correct, as the graph appears to show the wind circling around the Hanford site and the area where the readings were taken.

Meanwhile, health protection authorities seem to have quickly taken up the radon-related scenario, emphasizing that radon is common in the area, accumulating in places closer to the ground, and urging people with basements to get radon-measurement canisters to check their homes for excessive levels.

Radon gas is a natural byproduct of Uranium decay in the soil and considered a dangerous carcinogen that can cause lung cancer. Estimates state that outdoor radon levels cause some 800 of the 21,000 radon induced lung cancer deaths that occur in the United States every year.

However, according to a map of radon levels from the EPA’s own website, Benton County, in which the Hanford nuclear plant is located, has relatively low levels radon, even when compared to other American states.

The Hanford nuclear site, on the other hand, holds some 56 million gallons of radioactive waste stored in underground tanks that were built between the 1940s and 1970s. Those who used to work at the facility have told RT that vapor incidents are common when radioactive waste is being transported between tanks, which happens often, as the tanks are wearing out.