“A frightener to try to sway for the Brexit referendum.
Go for the vulnerable & let their imagination go riot.
No pictures available of the suspect device….ha ha ha ha.” 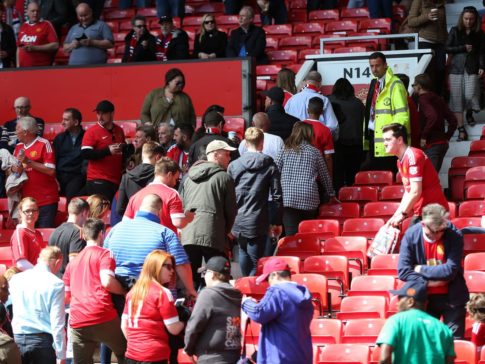 Tens of thousands of people were forced to evacuate Manchester United’s Old Trafford stadium minutes before kick-off after a suspect package was found.

Members of the Army Bomb Squad later went to the ground to examine what senior  figures told the Independent appeared to be a phone attached to a gas pipe.

Greater Manchester Police described the phone device as “incredibly lifelike” and a controlled explosion was then carried out within the stadium.

On further inspection, police said the device “wasn’t viable” but a search of the stadium is still ongoing.

Players who had been warming up were told to leave the field and fans were initially asked to leave just the Stretford End and the Sir Alex Ferguson stands.

However it was then announced that the game had been abandoned and everyone was asked to leave.

Sniffer dogs and an army bomb disposal unit arrived at the scene and could be seen walking through the stands and on the side of the pitch.

Speaking before the bomb squad’s arrival, Assistant Chief Constable of Greater Manchester Police John O’Hare said: “We are doing everything we can to investigate this item as quickly as possible, however our priority is obviously to ensure the safety of everyone in the stadium and surrounding area.

“As a result, today’s game has been abandoned and a controlled evacuation of the stadium has now taken place.

“We are awaiting the imminent arrival of military colleagues to come and support us and establish what exactly we are dealing with.”

He apologised for the inconvenience caused to fans, saying they did not “take the decision lightly” and thanked people for their support and assistance.

The club has described the incident as “Operation Code Red”.

A spokesman for Manchester United said: “Due to the discovery of a suspect package in the North-West Quadrant of the Old Trafford ground, the match against Bournemouth has been abandoned today on police advice.

“People in the stadium were asked to remain in their seats while the forecourt was cleared of fans already evacuated from the stadium.”