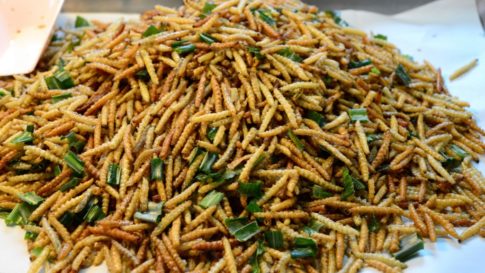 The Swedish government is taking an extremely bizarre commitment to fighting climate change by spending large sums of tax payer money to develop ‘meat’ made from mealworms and crickets.

Vinnova, the Swedish government agency that distributes money for research and development, is spending some 2.7 billion kronor ($261 million) to replace conventional meat with ‘climate-friendly’ insect ‘meat’ and other strange alternatives.

Green activists and the United Nations are behind such political initiatives as ‘Meat Free Mondays’ — a gateway to full vegetarianism — which are based on the premise that meat consumption is driving man-made climate change. Another method to reduce that so-called burden on the earth is replacing meat protein with that harvested from insects instead.

To that end, Vinnova is awarding half a million kronor each to fifteen different projects across the country, each of which tasked with creating an “edible prototype” of a new food.

Among the mouth-watering projects being funded are an attempt to produce a “good and healthy product from mealworms which are fed on vegetable food scraps to become a climate friendly source of protein”, “food prototypes” made from “refined mealworms”, and mincemeat made out of “climate smart insects” such as crickets.

Other enticing offerings not involving insects include “climate-fungal protein”, a “healthy vegetarian barbecue” made from by-products” and “fibrous raw materials”, and a “blue cheese-like product” made from beans

In November there will be a competition held to select the best product, with a potential of an extra two million kronor investment from the government to get the “food” off the ground, reports Breitbart.

According to a press release from Vinnova, the project has the goal of increasing the Swedish food industry’s competitiveness with “products that are developed based on raw materials that can be produced cost-effectively in Sweden.”

The press release informs Swedes that they can look forward to this type of food being in their grocery stores in the near future.

These initiatives to wean populations off conventional meat to combat climate change are becoming a trend as Denmark currently is weighing whether to implement a new tax on red meat.

With cattle allegedly contributing a tenth of global emissions, the Danish Council of Ethics has recommended an initial tax on beef, with a view to extending it later on to all red meat.

The attack on the consumption of meat has been effecting the U.S. as well.

And if you think it’s just those liberal Europeans who are planning to restrict the consumption of beef, think again, says Patrick Wood, a U.S. economist and expert on global governance who authored the book “Technocracy Rising: The Trojan Horse of Global Transformation.”

Wood says the attack on meat is global and – like many of the ideas that get made into policies by the White House, Congress and state legislatures – they originate at the United Nations and its agenda for “sustainability.”

“They’ve tried to pull this off in various ways in several states already, and people have rejected it,” Wood said of the beef tax. “But they keep trying, and they’re passionate about cow farts, the methane.”