– Incompetence Personified: Illinois Has Devolved To One-Off Funding Bills As It Still Can’t Pass A Budget:

As Illinois struggles to get its fiscal house in order (good luck with that), it has devolved into funding key programs with one-off stopgap measures rather than approving an overall comprehensive budget. The state remains the only remaining state without a 2016 plan. 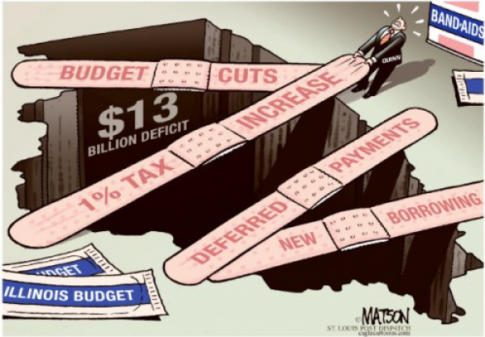 Most recently, lawmakers overwhelmingly approved $700 million to fund social service programs, however, as the Chicago Sun Times reports, the bill is likely to sit on Governor Bruce Rauner’s desk as he tries to push lawmakers to come to an agreement on a balanced budget instead of one-off solutions.

“The administration remains focused on enacting a truly balanced budget alongside meaningful reforms, and the Governor will continue negotiating in good faith toward a bipartisan agreement” said Rauner spokeswoman Catherine Kelly.

The bill included enough money to provide about 46% of what social service providers and programs such as Catholic Charities received from the state last year, and lawmakers such as Democrat Greg Harris are pushing to have the money released immediately.

“This is a $700 million piece of legislation that would help the neediest at the time when they need help the most. This is money that is available to be dispersed immediately.”

Legislators are haggling over a budget that under its current proposal would increase tax revenues by $5.4 billion by raising personal income tax rates from 3.75% to as much as 4.85%, cut spending by $2.5 billion, and borrow $5 billion in order to pay an expected $10 billion deficit by the time the fiscal year ends July 1.

All of this is just another example of the state of complete disarray that municipalities, cities, and states are in all across the U.S. Between pension funds going insolvent, states missing budget projections by a billion dollars, and in Illinois’ case, flat out inability to even know where to begin to solve the massive amount of accumulated debt, the pressure is building on Congress to start talking up bailout programs – because right now, helicopter money is literally the only thing that can save everyone from defaulting all at once.