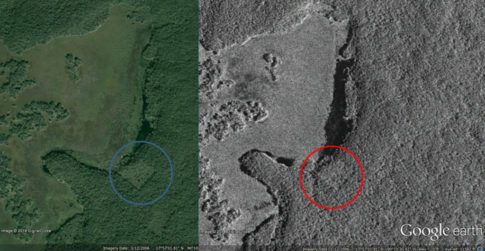 – That Long-Lost Mayan City a Teen Found Isn’t Lost … or a City:

How can you resist a headline like “Quebec teen may have discovered long lost Mayan city”?  Alas, the story going viral today is too good to be true, according to archaeological experts. The supposed lost pyramid? More likely an abandoned field.

This much is true: William Gadoury, now 15, won a contest to present his theory that Mayan cities were correlated with constellations at a conference a few years ago. He happened to be next to a booth of the Canadian Space Agency, where scientists took notice and decided to help the kid out. So Canada turned its RADARSAT-2, a satellite that usually tracks sea ice and shipping in Canada, to a remote corner of Mexico—right where Goudry’s constellation theory predicted a city would be. Lo and behold, those images seemed to show manmade structures.

Satellite imagery can be a powerful tool for studying the ancient world. “Space archaeologists” like Sarah Parcak want to use readily available data like this to lower the barriers to entry in science, and a teenager finding a long-lost city would be a pretty stunning proof of concept. But that isn’t what the images show.

The square in the CSA’s satellite images is probably an abandoned field, and another spot may be a small dry lake or clearing in the jungle, says archaeologist Ivan Šprajc. Gizmodo, in its updated story, has noted the same about the square structure.

Moreover, experts are skeptical of the claim that the Maya built their cities according to constellations. They did indeed have constellations, but there is no complete canonical list of them, so the theory is hard to test. “Maya constellations that we know of, with the exception of Scorpio, bear no relation to those we find on modern star maps,” says Anthony Aveni, a founder of the field of archeoastronomy. What seem like bizarre locations for cities can be explained by other factors, like access to swamp mud for their terraces.

And no matter what your star map tells you, chances are good you’ll hit upon a settlement in that area. “The Maya area was so densely occupied in Classic Maya times that many years ago a well known archaeologist, Ed Kurjack, told me that the area looked much like the Ohio Valley, denuded of trees and full of towns that were fairly close to one another,” wrote Susan Milbrath, a curator at the Florida Museum of Natural History, in an email. “So at any given point you would be likely to find an archaeological site.” The archaeologist Richard Hansen pointed out that the location appears to be very close to that of the ancient Mayan city of Uxul, which has been under excavation since 2009—not exactly a long-lost city.

A teenager inquisitive enough to dig deep into Mayan cities and constellations is awesome. The possibility of satellite imagery for archaeology is awesome, too. But let’s not overblow it.

UPDATE 5/11/16 5:40 PM ET: Geoffrey Braswell, a mesoamerican archaeologist at UC San Diego, and his graduate students have, by coincidence, actually been working in this area, and they immediately recognized the features in the satellite photos. The first image, Braswell says, is of the Laguna El Civalón, and the two rectangular features next to it are fields, probably either weed-filled fallow fields or marijuana fields based on the amount of vegetation.

The feature in the second image is a dried-up swamp, though an interesting archaeological site lies just to the south. “San Felipe was an important stop on the Spanish camino real linking Campeche (Mexico) to Lake Petén Itzá (Guatemala),” writes Braswell in a statement. The Mexican archaeologist Teri Arias Ortiz may have found a church while excavating the area.