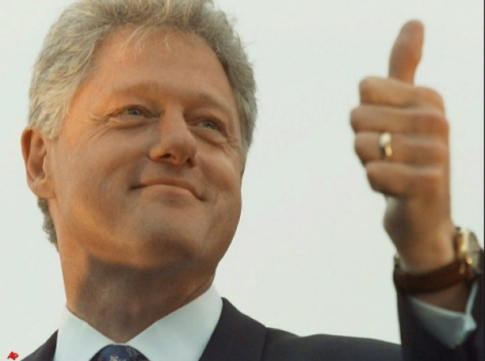 – Did The Clinton Foundation Give $2 Million To Bill’s “Energizer” Mistress?:

At Bill Clinton’s behest, a $2 million commitment for Energy Pioneer Solutions was placed on the agenda during a September 2010 conference of the Clinton Global Initiative. As it turns out, the commitment is a bit of an issue…

At the heart of the issue is the foundation sent funding to a company that had significant ties to the Clinton family according to the WSJ. The IRS website states that any 501(c)(3) should not be operated for the benefit of private interests. 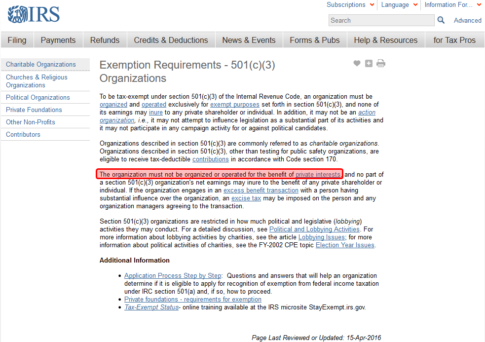 The WSJ explains the connections

Energy Pioneer Solutions was founded in 2009 by Scott Kleeb, a Democrat who twice ran for Congress from Nebraska. An internal document from that year showed it as owned 29% by Mr. Kleeb; 29% by Jane Eckert, the owner of an art gallery in Pine Plains, N.Y.; and 29% by Julie Tauber McMahon of Chappaqua, N.Y., a close friend of Mr. Clinton, who also lives in Chappaqua.

Owning 5% each were Democratic National Committee treasurer Andrew Tobias and Mark Weiner, a supplier to political campaigns and former Rhode Island Democratic chairman, both longtime friends of the Clintons.

The Clinton Global Initiative holds an annual conference at which it announces monetary commitments from corporations, individuals or nonprofit organizations to address global challenges—commitments on which it has acted in a matchmaking role. Typically, the commitments go to charities and nongovernmental organizations. The commitment to Energy Pioneer Solutions was atypical because it originated from a private individual who was making a personal financial investment in a for-profit company. 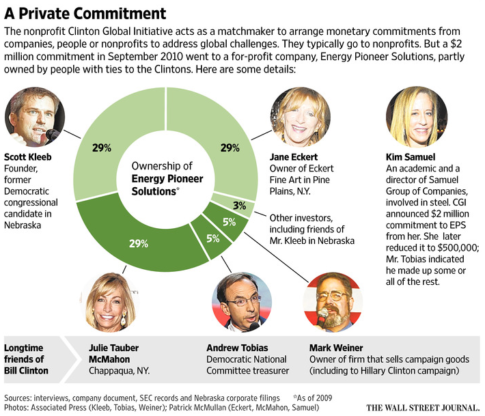 Not only did the Clinton’s oversee $2 million being sent to friends at Energy Pioneer Solutions via the foundation, according to the WSJ, Bill also personally endorsed the company to then-Energy Secretary Steven Chu for a federal grant, ultimately leading to a grant in the amount of $812,000. Of course, Chu now says he doesn’t remember the conversation.

As it is no stranger to having to scramble and do damage control, the foundation has come out with the following narrative:

Asked about the commitment, foundation officials said, “President Clinton has forged an amazing universe of relationships and friendships throughout his life that endure to this day, and many of those individuals and friends are involved in CGI Commitments because they share a passion for making a positive impact in the world. As opposed to a conflict of interest, they share a common interest.”

A Clinton Foundation spokesman, Craig Minassian, called the commitment an instance of “mission-driven investing…in and by for-profit companies,” which he said “is a common practice in the broader philanthropic space, as well as among CGI commitments.” Of thousands of CGI commitments, Mr. Minassian cited three other examples of what he described as mission-driven investing involving a private party and a for-profit company such as Energy Pioneer Solutions.

Energy Pioneer Solutions has struggled to operate profitably, and an audit found deficiencies in how the company accounted for expenses paid with federal grant money – surprise, surprise, another government funded (and Clinton funded) enterprise that can’t make a profit and has lost taxpayer money.

Energy Pioneer Solutions has struggled to operate profitably. It lost more than $300,000 in 2010 and another $300,000 in the first half of 2011, said records submitted for an Energy Department audit. Mr. Kleeb noted that losses are common at startups.

Recently, Mr. Kleeb laid off most of his staff, closed his offices, sold a fleet of trucks and changed his business strategy, promising to launch a national effort instead. “We are right now gearing up to start under this new model,” he said.

Asked if Energy Pioneer Solutions has ever broken even, Mr. Kleeb said, “We’re at that stage…We are expanding and doing well. We have partnerships, and it’s good.”

Partnerships indeed. Speaking of partnerships, there is a connection that is noteworthy in this tangled web of cronyism…

One of the owners of Energy Pioneer Solutions was Julie Tauber McMahon. She described Bill as a “close family friend” in an interview, but perhaps there is a bit more to that story.

The fit, blond mother of three, who lives just minutes from Bill and Hillary Clinton’s home in Chappaqua, West­chester, is the daughter of Joel Tauber, a millionaire donor to the Democratic Party.

McMahon, 54, is rumored to be the woman dubbed “Energizer” by the Secret Service at the Clinton home because of her frequent visits, according to RadarOnline.

Secret Service agents were even given special instructions to abandon usual protocol when the woman came by, according to journalist Ronald Kessler’s tell-all book, “The First Family Detail.”

“You don’t stop her, you don’t approach her, you just let her go in,” says the book, based on agents’ accounts.

“Energizer” is described in the book as a charming visitor who sometimes brought cookies to the agents.

The book describes one sun-drenched afternoon when agents took notice of the woman’s revealing attire.

“It was a warm day, and she was wearing a low-cut tank top, and as she leaned over, her breasts were very exposed,” an agent is quoted in the book.

“They appeared to be very perky and very new and full . . . There was no doubt in my mind they were enhanced.”

McMahon has denied in reports having an intimate relationship with Bill Clinton.

While nobody knows for certain if Bill was funding a mistress (which really wouldn’t surprise anyone), the fact remains that this is yet another stunning example that cronyism is alive and well. 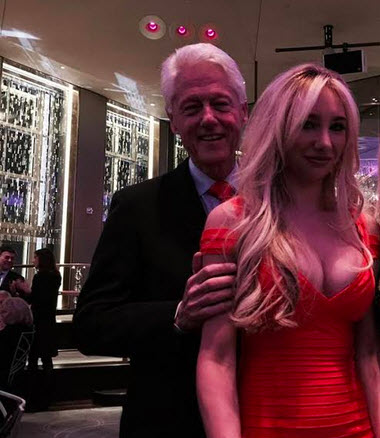