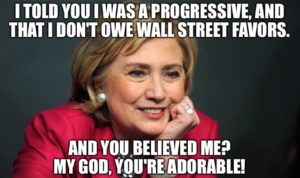 The latest Quinnipiac University Survey on the 2016 U.S. Presidential election is absolutely fascinating, and presents some very bad news for team Clinton, as well as all the clueless pundits who say Trump can’t win.

The major takeaway is that Trump and Clinton are locked in a total dead heat in the three key swing states of Florida, Ohio and Pennsylvania. This is remarkable considering all the heinous things Trump said on his way to the GOP nomination, and the fact that he’s barely started to “sell” himself to the general electorate, which is his primary skill in life…

The truly fascinating takeaway from the survey can be found in the details. The key demographics Clinton needs to do well in (youth and independents) are areas in which she struggles mightily in these swing states. In contrast, Bernie Sanders dominates Trump in those two categories, proving once again that he’s by far the stronger general election candidate.

Most Hillary Clinton supporters remain stuck in a comical level of denial when it comes to the weakness of their candidate, and the very real threat posed to her by Donald Trump. Damon Linker suffers from no such hangups, and earlier today he expressed his concerns in a powerful article titled simply, Dear Hillary…

I have to admit, you have me worried. And for more than just the usual reasons.

In the week since it became clear you would be facing Donald Trump in the general election, I’ve sensed giddy delight coming from your camp.

Believe me, I get it.

Trump has incredibly high unfavorable ratings. Women hate him, as do Hispanic voters. The very things that made him attractive to the Republican base — the anger, the fear-mongering, the misogyny — could drive millions of undecided voters into your outstretched, welcoming arms.

I hate to break it to you, but you’re not especially popular either. Sure, Trump’s unfavorables are higher than yours — but yours are pretty damn high! And it’s not like those numbers are likely to move very much. You’ve been a fixture on the political scene for close to a quarter century now. And those young people who know the least about you have been Bernie Sanders’ most passionate supporters in the primaries. That might not prove fatal in the general election, but it’s not exactly good either.

And then there’s Trump.

With 10 contests left to go in the primaries, Trump has already surpassed Mitt Romney’s vote total for the entire 2012 primary season by roughly 700,000 votes. And he did it against a more sharply divided field, and while winning a smaller portion of overall votes cast (though that number will narrow between now and the end of the primary season on June 7). Republicans are energized, with turnout up sharply from four years ago. This means that the baseline assumptions that have held since 1992 may not pertain this time around.

In every single one of those elections, the Republican candidate has run on pretty much the same cluster of issues: tax cuts, especially for the wealthy; muscular internationalism; social conservatism; free trade. That’s also the matrix of positions Democrats of your generation are conditioned to respond to and attack.

How will you respond to the onslaught? I sure hope the answer is that you have no idea yet. Because if you think the answer is obvious or simple, you’re deluding yourself.

No Democrat has ever run against a candidate like Trump. He overturns every settled ideological and temperamental expectation of normal politics. He will go after you with a ferocity we’ve never seen before, and the assault will be unremitting — yes, on the stump, in TV and radio ads, and in the debates, but also in 24/7 cable news coverage and an endless stream of infectiously quotable tweets, half of them capped by what’s become this election cycle’s all-purpose three-letter dismissal: Sad!

Don’t try to define Trump, whether by labeling him “dangerous” or anything else. He’s a master of rhetorical jujitsu, instantly turning criticisms and insults into honorifics. Let Trump define himself. Of course he’ll try to define you, too — as “Crooked Hillary,” among other things — but your self-definition needs to prevail over the one he tries to pin on you. If it doesn’t, you’ll lose.