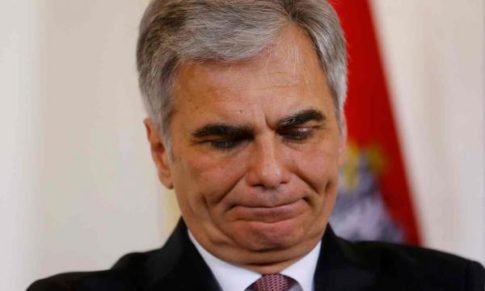 Two weeks after Austria’s dramatic result in its first round presidential elections which saw the right wing, anti-immigrant Freedom Party sweeping its competition, gathering over 35% of the vote and leaving the other five candidates far behind, moments ago Austria unveiled the latest casualty from Europe’s anti-refugee, right wing revulsion when the country’s Chancellor Werner Faymann resigned after losing the support of his colleagues in the Social Democratic party.

“I am thankful for seven and a half years and wish my successor much luck,” he said at a hastily arranged press conference, the oe24.at news site reported. “I am standing down because I no longer have support in the party.”

As the Guardian notes, Austria has been braced for political turmoil ever since rightwing populist Norbert Hofer won a landslide victory in the first round of the country’s presidential elections last month.

Hofer, of the rightwing Freedom party, defied pollsters’ predictions to beat the Green party’s Alexander Van der Bellen into second place, gaining 36% of the vote. The two candidates will go head to head in a run-off ballot on 22 May.

Faymann faced calls to resign after the vote, saying at the time that the result was a “clear signal to the government that we have to cooperate more strongly”.

Many commentators say the crisis of the political establishment in Austria has much to do with the fact that the two centrist parties have governed the country in a “grand coalition” for the past 10 years.