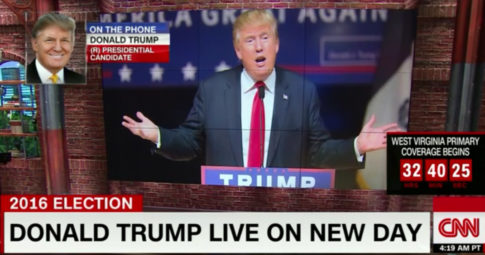 – Trump On Debt Renegotiation: “You Never Have To Default Because You Print The Money”:

Following Donald Trump’s Thursday comments that rising interest rates would be disastrous for the economy, saying that “we’re paying a very low interest rate. What happens if that interest rate goes up 2, 3, 4 points?” hinting that the U.S. should “renegotiate longer-term debt” with creditors and that if the economy crashes he “can make a deal”, various media outlets went to town on Trump, most notably the NYT, which took Trump to task:

Asked on Thursday whether the United States needed to pay its debts in full, or whether he could negotiate a partial repayment, Mr. Trump told the cable network CNBC, “I would borrow, knowing that if the economy crashed, you could make a deal.”

Such remarks by a major presidential candidate have no modern precedent. The United States government is able to borrow money at very low interest rates because Treasury securities are regarded as a safe investment, and any cracks in investor confidence have a long history of costing American taxpayers a lot of money.

Experts also described Mr. Trump’s proposal as fanciful, saying there was no reason to think America’s creditors would accept anything less than 100 cents on the dollar, regardless of Mr. Trump’s deal-making prowess.

“No one on the other side would pick up the phone if the secretary of the U.S. Treasury tried to make that call,” said Lou Crandall, chief economist at Wrightson ICAP. “Why should they? They have a contract” requiring payment in full.

As the NYT admits, when “pressed to elaborate on his remarks, Mr. Trump did appear to step back. He said that he was not suggesting a default, but instead that the government could seek to repurchase debt for less than the face value of the securities. The government, in other words, would seek to repay less money than it borrowed.”

In any case, the confusion about Trump’s intentions continued and ultimately led to his latest CNN appearance in which he explained what he meant earlier this morning.

“If interest rates go up, we can buyback debt at a discount if we are liquid enough as a country. People say I want to default on debt – these people are crazy. First of all you never have to default because you print the money I hate to tell you, so there is never a default. It was reported in the NYT that I want to default on debt – you know I am the king of debt, I love debt, but debt is tricky and its dangerous. But let me just tell you: if interest rates go up and bonds go down, you can buy debt – that’s what I’m talking about. So here is the story, if we have an opportunity where interest rates go up and you can buy back debt at a discount. I always like to be able to do that if you can do that. That’s all I was talking about, they have it like I’m going to go back to creditors and I am going to renegotiate or restructure debt. It’s ridiculous.”

Here is the clip:

Aside from the comment that “one never has to default if one is printing the money”, which has not exactly led to favorable outcomes for countries which have done just that and the only difference in the case of the US is possession of the reserve currency for now, what Trump is really talking about is inflating away the debt, something the Fed and all other central banks have been desperately trying to do for the past 7 years, so far without much success.

In effect, Trump’s point is really just a continuation of Fed policies: boosting inflation, and leading to a spike in long end yields; all Trump does is explain mechanistically how the US can take advantage of this “debt inflation”, which as he correctly points out, can simply be repurchased at a price well below par if rates are surging in effect reducing the nominal debt burden.

Which incidentally brings us back to Trump’s point about wanting lower interest rates: if the “king of debt” is so eager to buyback debt at a discount, what he should be urging is not lower but far higher interest rates. Now that is a proposal the Fed, Goldman and all global banks would love to get behind, even if it means leaving the economy in a state of even bigger collapse…