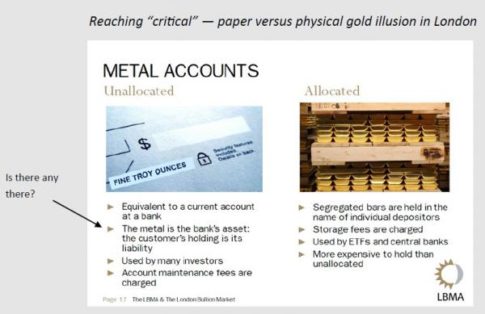 – “The Death Of The Gold Market” – Why One Analyst Thinks A Run On London Gold Vaults Is Imminent:

When it comes to tracking the nuances at the all important margin of the gold market, few are as observant as ADMISI’s Paul Mylchreest, whose December 2014 analysis showed the stunning role gold holds in the new normal as a funding “currency” for BOJ interventions in the form of a long Nikkei/short gold (and vice versa) pair trade, indicating that central banks directly intervene in gold pricing (by selling, of course) when seeking to push paper asset prices higher.

In his latest report he follows up with an even more disturbing analysis on the state of the gold market. Specifically, he looks at what historically has been the hub of gold trading, the London bullion market, and finds that it “is running into a problem and is facing the biggest challenge since it collapsed from an insufficient supply of physical gold in March 1968.“

We suggest readers set aside at least an hour, and two coffees for this “must read” report. For those pressed for time, the executive summary is as follows: using data from the LBMA and Bank of England on gold stored in London vaults and net UK gold export data from HM Revenue & Customs, Mylchreest calculates that the “float” of physical gold in London (excluding gold owned by ETFs and central banks) has recently declined to +/- zero.

Summarizing the data in the report.

The full details of how Mylchreest gets to this number are broken out in detail in the attached report; fast-forwarding to his troubling summary we read the following conclusion, one we have observed numerous times when analyzing the troubling trends within the gold vaults of none other than the Comex itself: “if we are correct, the London Bullion Market is running into a problem and is facing the biggest challenge since it collapsed from an insufficient supply of physical gold in March 1968.”

Some more of the report’s core findings, most of which should come as no surprise to regulatr readers:

Besides the growth in physical gold demand from existing sources, there is more than US$200 Billion of trading every day in unallocated (paper) gold. If buyers lose confidence in the market’s structure and ability to deliver actual bullion, the market could become disorderly (via an old fashioned “run” on the vaults) as it seeks to find the true price of physical gold.

Intuitively, we think that central banks might have lent/leased gold to maintain the status quo and mask what is technically a default. However, rather than being used to provide temporary liquidity, it is possible that loans/leases are being rolled. This is not sustainable and implies dual ownership claims.

But the vulnerability is not confined to current trends in physical bullion.

If there is no gold float, there is nothing supporting more than US$200 Billion of trading every day in unallocated (paper) gold instruments which accounts for more than 95% of gold trading in London.

The convention of trading unallocated gold has been based on a fractional reserve system. It works as long as gold buyers retain confidence that the banks could deliver physical gold if demanded, but our analysis suggests that they could not.

For more than four years, selling of paper gold overwhelmed growing demand for physical gold from the likes of China and central banks (in aggregate). The “gold market” became a chimera as fundamentals were turned upside down. Banks added paper “gold supply” in almost elastic fashion on occasions when western investors increased net gold exposure via paper gold instruments.

We’ve argued for many years that a breakdown and bifurcation in the gold market between physical and paper gold substitutes would be necessary for accurate price discovery of physical gold bullion. The lead article in the January 2016 edition of the LBMA’s quarterly magazine was titled “Wholesale Physical Markets are Broken”, which might be confirmation that this process is reaching an advanced stage.

In the interim, we could move towards a two-tier gold market – where physical gold trades at a premium to paper gold instruments, such as unallocated gold in London and COMEX gold futures in the US.

It saddens us that London’s position and reputation as the hub of the world gold market is in jeopardy unless the LBMA, BoE and other stakeholders embrace rapid and far-reaching reform. The London Bullion Market is structurally flawed and overdue for reform – it is not an exchange, it is under-regulated and there is near zero transparency. More than anything, it is primarily a system of paper credits/debits which benefits the banks and undermines the investment case for gold and, consequently, interests of gold investors.

Seeing the Achilles Heel of London’s gold market, China’s Shanghai Gold Exchange (SGE) launched a Yuan-denominated physical gold benchmark gold contract on 19 April 2016. Examining the SGE’s white paper, it’s clear that China acknowledges that its introduction should lead to a more realistic price for physical gold and that its strategy is to shift price discovery in the gold market from London to Asia.

Unfortunately time is running out for London and meanwhile…

The vast pools of western capital are not underweight gold, they are almost zero–weighted. Ultimately, gold is a bet on financial system mismanagement in many guises – such as inflation, deflation, rising credit risk, declining confidence in policy makers, etc. The fact that mainstream investors and commentators have started to have doubts about central bank policies has been positive for gold.

For years, the typical pushback on investing in gold by western investors was that it had no yield. In a bizarre twist of investing, more than US$7 Trillion of bonds now have negative yields thanks to unconventional monetary policies like ZIRP/NIRP, and gold investing can be justified on a yield basis. Unlike every other financial asset, including sovereign bonds, physical gold has no counterparty risk.

We have been here before…

“Someone once said, ‘no one wants gold, that’s why the US$ price keeps falling.’ Many thinking ones laugh at such foolish chatter. They know that the price of gold is dropping precisely be-cause ‘too many people are buying it’! Think now, if you are a person of ‘great worth’ is it not better for you to acquire gold over years, at better prices? If you are one of ‘small worth’, can you not follow in the footsteps of giants? The real money is selling ALL FORMS of paper gold and buying physical! Why? Because any form of paper gold is losing value much, much faster than metal. Some paper will disappear all together in a fire of epic proportions! The massive trading continues at LBMA, but something is now missing”

Anonymous quote from many years ago (the 1990s!)