– Albert Edwards: “Let Me Tell You How This All Ends”:

The dollar’s recent rapid slide has been accompanied by a constant backdrop of dovish cooing from the Fed. Until this week, SocGen’s Albert Edwards notes that both equity and commodity markets had embraced the weak dollar as the elixir to solve all their ills. That relief, however, has now proved fleeting as fear of weak economic activity has reasserted its influence on investors. The weak dollar, Edwards warns, should be seen as merely a shuffling of deckchairs on the Titanic before the global economy sinks below the icy waves.

Risk assets are once again refocusing on the increasingly dismal prospects for global growth rather than the short-term relief of dollar weakness, according to SocGen’s inimitable Albert Edwards. The US remains the main concern, although the rapid unravelling of Abenomics in Japan and a likely imminent tightening of monetary policy in China to snuff out yet another housing bubble in the major cities also feature high on investors’ worry list.

But it is in the US that growth concerns remain most intense, with renewed weakness in the manufacturing ISM as we move into Q2 following on from the moribund 0.5% qoq Q1 GDP outturn. Yet there was some optimism around after the GDP release that non-farm businesses inventories have risen at a slower pace  ie only $61bn in Q1 2016 against $87bn in Q4 2015 and a much faster $110bn pace in H1 2015. The slower pace of increase means that non-farm inventories have been a drag on GDP for three successive quarters, deducting an annualised 0.22% from Q1 GDP (and 0.12% and 0.8% in the two previous quarters). If you think that means that the inventory problem is solved though, think again. It’s not the level of inventories that are the problem, but the level relative to sales which are at heights normally seen preceding or at the depths of recession (see chart below).

It is disturbing for the growth bulls that the recent slower pace of inventory accumulation has made absolutely no dent on this overhang. We remind readers of our view that it is the business investment cycle (fixed and inventory) which, despite comprising only 15% of GDP, ’causes’ recessions in an accounting sense. The chart below shows that when yoy GDP is negative, the contribution of business investment to that decline is virtually 100%, ie recessions would seldom occur in the absence of the business investment cycle. With the US whole economy now plunging, the continuing inventory overhang is an increasingly precarious sword of Damocles hanging over investors’ heads as profits swoon and liquidation beckons. 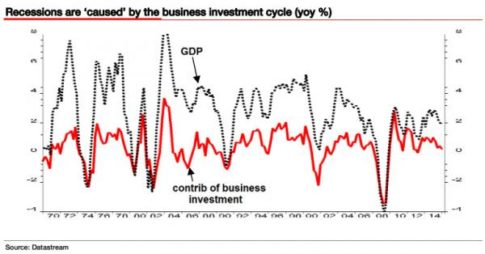 In addition to Edwards reality check, Andrew Lapthorne, SG’s quant guru, has been flagging the following chart to clients… Firstly, we all know by now that US companies consistently put the most optimistic spin on earnings to gratify both analysts that follow their companies and investors who want to hear good news. These manipulated earnings are what is reported each quarter and referred to as pro forma earnings. Andrew points out though that even moderately ‘scrubbed’ MSCI trailing operating earnings have been falling away precipitately in the US (this is a moderate scrub as opposed to a heavy scrubbing as defined by the EPS reported on a GAAP basis). This ties up exactly with what the whole economy profits data is also telling us. Most notably the current divergence between trailing operating profits and pro forma measures only normally occurs as a recession begins to unfold. This matters because the stock market eventually stops reacting to the manipulated pro forma earnings and slumps in line with what is really happening under the bonnet (or hood for my US readers). 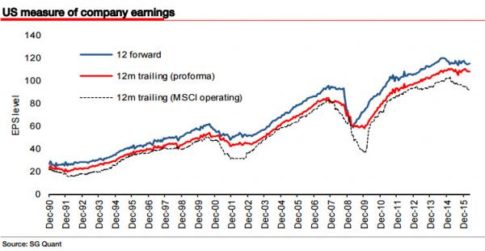 Let us return to the central banks and the games they are playing with the markets. The chart below shows just how detached US stocks have become from earnings (in this case we have used the MSCI operating metric discussed above). This is an exercise of stretching the PE elastic via loose monetary policy as far as you can in an attempt to boost real economic activity. Ultimately, though, if the earnings don’t arrive, the elastic will snap back and hit you square in the face. If you think the US situation looks bad, take a look at the eurozone chart on the right below where earnings remain dead in the water and PE expansion makes up well over 100% of the rise in equity indices. We have previously lauded Mario Draghi’s bubble blowing credentials as on par with Alan Greenspan.

Let me tell you how all this ends.

It ends with investors accepting that they can pretend no longer and profits are sliding into recession.

It ends as the equity market spirals into a deep bear market as company management reach the end of the road in the face of the recessionary conditions and ‘kitchen sink’ years of EPS manipulation.

It ends as corporate bond spreads explode as years of excess debt accumulation lead to widespread corporate bankruptcies, making the recession much deeper.

It ends with investors losing faith with the Fed as the resumption of QE proves ineffective in reviving the economy.

In a nutshell, it ends badly.

One final thought: On the front page of the Fitchburg Sentinel from July 31 1920, an exuberant business press headlined: “Ponzi will not reveal business secret.” 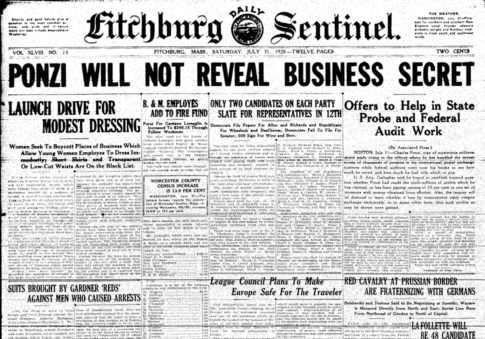 This was published less than a month before Charles Ponzi’s scheme blew up.

As Edwards concludes, actually, isn’t this exactly what central banks have done over the last few years to the financial markets?

1 thought on “Albert Edwards: “Let Me Tell You How This All Ends” … “In A Nutshell, It Ends Badly””