Russia has wasted no time in responding to NATO’s decision to deploy 4,000 troops to Russia’s border. Defense Minister Sergey Shoigu announced that Russia will be deploying two new divisions to the West, and one to the South (reportedly with 10,000 troops each) in order to counterbalance NATO’s increased military presence.

“The Defense Ministry is taking a number of measures to respond to the NATO military buildup at the Russian border. Before the year’s end two new divisions will be formed in the Western Military District and one in the Southern Military District.” Shoigu said. 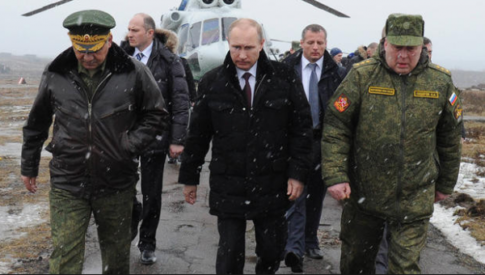 Aleksandr Grushko, Russia’s envoy to NATO said in response to NATO’s plan “we are not passive observers, we consistently take all the military measures we consider necessary in order to counterbalance this reinforced presence that is not justified by anything. Certainly we’ll respond totally asymmetrically.”

Regarding NATO’s confrontational approach, Grushko said “cooperation will be possible only when NATO countries start realizing that the policy of confrontation contradicts their own national interests.“

Grushko also warned the U.S. about flying reconnaissance missions over Russia, something they followed through on twice over the past month, as the U.S. continues to push the limits.

“It seems to me that these [reports on potential resumption of flights by US reconnaissance planes] are nothing more than another propaganda volley, but made with an intent. Reconnaissance aircraft will not fly over Russia.“

And finally, Russian Foreign Minister Sergey Lavrov sums up what Russia is thinking, which is that NATO is approaching Russia, not the other way around.

Here is a map of Russia’s regional military commands. Two divisions will be sent to the Western District, and one to the Southern District. Incidentally, as joint U.S. military drills began today in Moldova, which is virtually bordering Russia, lawmakers from the Party of Socialists of the Republic of Moldova and other protestors rallied to try and block U.S. military vehicles from crossing the border into Moldova..

Igor Dodon, the leader of the Party of Socialists of the Republic of Moldova called the drills a military occupation.

“Carrying out a march of NATO vehicles in Moldova can only be described as the military occupation of the country. It is a rough slap to the Constitution of the Republic and to the Parliament that adopted the declaration on permanent sovereignty and neutrality of Moldova“

With tensions already rising between the U.S. and Russia already, one incident in this newest development in the clash of militaries could very well lead to war. Furthermore, in the event of the U.S. electing a President Trump, with his shoot first, ask questions later attitude; or a President Clinton, with her neocon hawk backers pushing and prodding the world to the brink, may take the world there anyway.