– Support For Anti-Muslim AfD Hits Record High As 60% Agree That “Islam Does Not Belong In Germany”:

We recently pointed out that Germany’s Alternative for Germany (AfD) party was gaining significant popularity as the anti-immigrant and anti-Muslim tide continued to rise in Germany. We then noted that everyone in the establishment will be shocked when the AfD’s polling numbers started to climb higher.

We expect much more such back and forth between the “left” and the “right”, which just like in the US, will ultimately benefit the object the media has decided to target for ridicule, until – just like in Austria – Germany’s establishment is shocked when the AfD’s polling skyrockets in the coming months and leads to drastic changes in Germany’s political landscape. 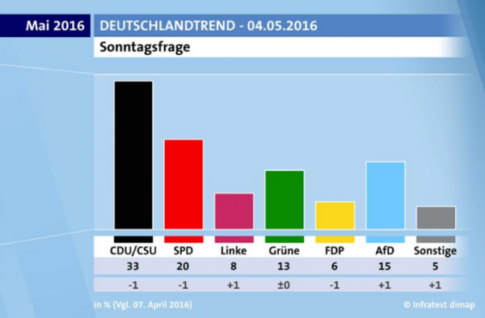 SPD experienced a loss of confidence across the board (family policy, property trust, social justice). 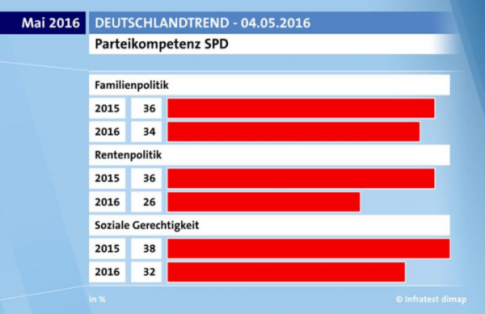 In yet another poll for Bild newspaper by the Insa Institute, an astonishing 61% of Germans agreed that Islam does not belong in Germany. This result further explains AfD’s surge in popularity, as the AfD reportedly has a section in its new party program called “Islam is not part of Germany”, which is a position that 92% of its supporters agree with.

With the AfD only behind SPD by 5 points in the polls, it won’t be long until the AfD is able to close the gap and become Germany’s second most popular party. An increasingly powerful AfD who shares the same anti-Muslim, anti-Sentiment as a growing number of German voters means that the political landscape in Germany is changing rapidly, and significantly.

As a bonus, the ARD poll indicates that it’s becoming quite clear Obama’s Transatlantic Trade and Investment Partnership (TTIP) proposal has found few supporters in Germany, which will put pressure on Angela Merkel not to support it.

47% view the TTIP proposal as having no economic benefit as opposed to 41% who believe the deal will yield benefits. 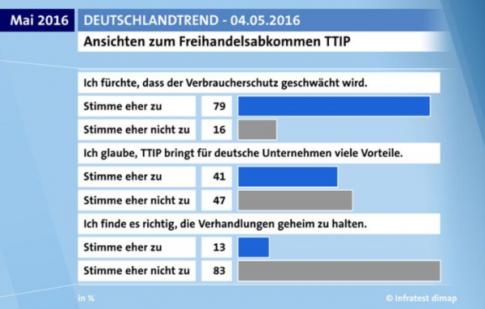