As Norway offers cash for refugees to leave, announcing that they won’t be accepting any more refugees from the EU, and Switzerland prepares its military to close down borders, the EU has seemingly had enough of every country acting as if it has any type of sovereignty left. The European Commission has announced that it is going to pull rank on everyone, and in Obama-like fashion, will be fining countries for not taking their fair share of refugees.

Here is a detailed summary of all that happened today in the ongoing European refugee crisis courtesy of Mish Shedlock.

The European Commission plans fines of $290,000 per person on countries refusing to take in their fair share of refugees.

This plan is aimed straight at Poland, Slovokia, Hungary, the Czech Republic, and Austria.

The UK, Ireland, and Denmark all have opt-out policies, but the UK cannot expect that to last forever unless the vote goes for Brexit.

Today the EC fired a warning shot across the bow of countries who believe they have a right to control their foreign policies.

The announcement comes in the form of Punitive Penalties for Refusing Asylum Seekers.

The European Commission has proposed reforms to EU asylum rules that would see stiff financial penalties imposed on countries refusing to take their share of asylum seekers.

The UK and Ireland can opt out of asylum policies, and the British government has already indicated it will not take part. Denmark is also exempt.

Countries refusing to accept their quota would effectively be fined – with the money going to frontline states such as Italy and Greece that have carried the burden.

The proposals for sanctions alarmed Central European countries that have refused to implement the refugee quota deal:

The four countries were outvoted when the quota plan was agreed.

Hungary’s government on Tuesday announced plans for a referendum on the EU’s resettlement plans.

For details, please see Anti-Immigration Party Wins First Round of Austria Elections: “We are Not the World’s Social Department”.

The Hungarian government’s plans to hold a referendum on whether it will accept the EU’s quota system on accepting migrants has been approved by the country’s top court, Hungary Today reported.

Hungarian Prime Minister Viktor Orban’s government has been strongly critical of EU pushes to resettle refugees and migrants across the continent, going as far as putting up fences on Hungary’s borders with neighbors Serbia and Croatia.

Orban has remained critical of these plans and on Tuesday evening Hungary’s Supreme Court refused to block the decision to hold a national referendum on the issue.

The vote is planned in September or early October, asking Hungarians “Do you want the EU, even without the approval of Hungarian parliament, to be able to prescribe the mandatory resettlement of non-Hungarian citizens in Hungary?”

After receiving approval from Hungary’s top court, the motion for a referendum will now be put to a parliamentary vote, where Orban’s Fidesz party holds a commanding majority. In the likely scenario that it is approved, an exact date will be set.

Opposition parties in Hungary have opposed the idea, with far-right eurosceptic party Jobbik calling for Hungary to refuse the quotas plan outright, without a referendum, news site Politics.hu reported. Meanwhile, the liberal Democratic Coalition warned that the referendum was actually taking Hungary towards leaving the EU.

The case for a UK Brexit is now crystal clear.

The UK’s “opt-out” of such items will not last forever. This is just the beginning of nannycrat nonsense.

In Hungary, the liberal Democratic Coalition warned that the referendum was actually taking Hungary towards leaving the EU.

Hungary’s Referendum Question: “Do you want the EU, even without the approval of Hungarian parliament, to be able to prescribe the mandatory resettlement of non-Hungarian citizens in Hungary?”

Question Every Nation Needs to Ask

Let’s for a moment presume the US, Mexico, Canada, Honduras, Guatemala were in an “Amero Agreement” with each country having equal say.

Here’s the revised question “Do you want the Mexico, Honduras, and Guatemala, even without the approval of US Congress, to be able to prescribe the mandatory resettlement of non-US citizens in the US?”

That is exactly what’s happening in Europe.

The US would never cede foreign policy to Mexico and Honduras, so why should the UK, Hungary, or Poland cede policy to a group of other nations? 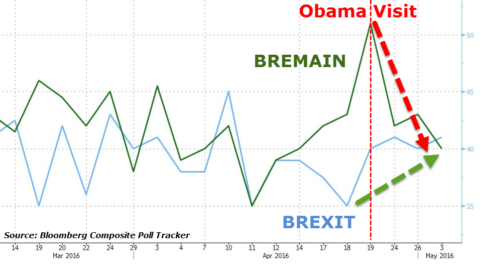 “Brexit leaders are thrilled President Barack Obama came out against them, because they are seeing a bounce in the polls.”

Key quote: “The Americans would never contemplate anything like the EU for themselves or for their neighbors, in their own hemisphere,” said London Mayor Boris Johnson.