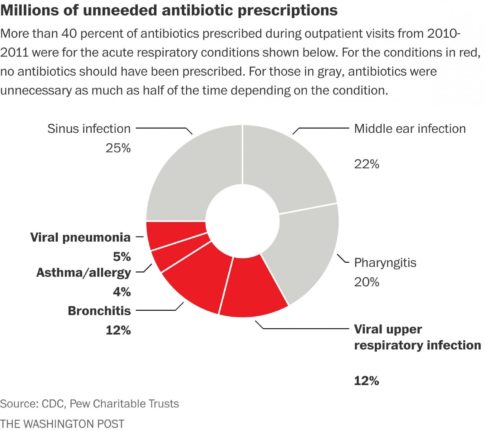 – 1 in 3 antibiotics prescribed in U.S. are unnecessary, major study finds:

Nearly a third of antibiotics prescribed in doctors’ offices, emergency rooms and hospital-based clinics in the United States are not needed, according to the most in-depth study yet to examine the use and misuse of these life-saving drugs.

The finding, which has implications for antibiotics’ diminished efficacy, translates to about 47 million unnecessary prescriptions given out each year across the country to children and adults. Most of these are for conditions that don’t respond to antibiotics, such as colds, sore throats, bronchitis, flu and other viral illnesses.

Although health officials have been warning for decades about the overuse of antibiotics and its contribution to the development of drug-resistant bacteria, the research from the Centers for Disease Control and Prevention and the Pew Charitable Trust is the first to quantify the depth of the problem.

“We’ve all been hearing, ‘This is a problem, this is problem,’ and we all understood the general concept that there is a lot of antibiotic use,” said David Hyun, a senior officer with Pew’s antibiotic resistance project and one of the authors of the report published Tuesday in JAMA. Pew also published a companion report using the same data.

“Why this study is so important: It actually provides concrete numbers,” Hyun said.

he study analyzed data for all antibiotic use in the three settings as collected from two major CDC surveys from 2010 to 2011. Antibiotic prescriptions written there represent the majority of dollars spent on antibiotics in this country.

“Antibiotics are life-saving drugs, and if we continue down the road of inappropriate use we’ll lose the most powerful tool we have to fight life-threatening infections,” said CDC Director Tom Frieden. “Losing these antibiotics would undermine our ability to treat patients with deadly infections [and] cancer, provide organ transplants and save victims of burns and trauma.”

Among the key findings:

• About 13 percent of all outpatient visits in the United States — about 154 million visits annually — result in an antibiotic prescription.

• Half of these prescriptions are unnecessary because many are for viral illnesses.

“Clinicians are concerned about patient satisfaction and the patient demand for antibiotics,” she said. But the majority of individuals do trust their doctors to make the right diagnosis, and better communication by doctors about the dangers of antibiotic overuse can lead to more appropriate prescribing, she said.

An accompanying editorial in JAMA noted that the numbers provided in the report likely are an undercount because they don’t include the times antibiotics are given when patients talk to doctors’ offices over the telephone, or when patients seek medical care at urgent care clinics, retail pharmacies and dentists’ offices.

Also not included are prescriptions written by nurse practitioners and physician assistants.

But even relatively simple steps, such as displaying a poster in patient waiting rooms can cut down on antibiotic prescribing, the editorial said.

The overuse of antibiotics has led to the frightening rise of drug-resistant superbugs in recent years. The CDC has warned that “nightmare bacteria” are increasingly resistant to even the strongest antibiotics, posing a growing threat to hospitals and nursing homes nationwide.

Last year, the White House announced an aggressive plan to combat antibiotic-resistant bacteria, which already cause an estimated 2 million illnesses and 23,000 deaths every year just in the United States. The administration set a target of reducing inappropriate antibiotic use in outpatient settings by half by 2020.

Based on the new report, this goal would be reached by cutting outpatient antibiotic use by 15 percent overall, which would result in approximately 23 million fewer antibiotics prescribed annually by 2020.