Sadly, a typical consequence of war is that innocent “collateral damage” lives are lost. The civil war in Syria is no different, as over the past week four medical facilities were hit with missiles from fighter jets taking out their targets from the skies, pushing the civilian death toll even higher. 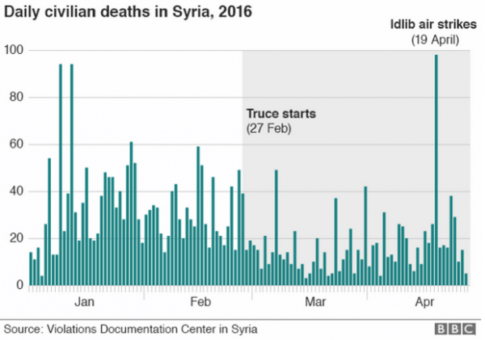 One of the targets that got hit last week (during a truce nonetheless) was a pediatric hospital in Aleppo that was supported by both Doctors Without Borders and the International Red Cross. Recovered cctv footage captures the moments before, during, and after the hospital took a direct hit.

The video also shows what is said to the be the last pediatrician in the city walking the halls moments before the missile hit, killing him and an estimated 50 others.

U.S. Secretary of State John Kerry condemned the attack, immediately blaming the Syrian government. Predictably everyone involved in the region has denied having anything to do with the strike.

“We are outraged by yesterday’s airstrikes in Aleppo on the al Quds hospital supported by both Doctors Without Borders and the International Committee of the Red Cross, which killed dozens of people, including children, patients and medical personnel,” he said in a statement.

“It appears to have been a deliberate strike on a known medical facility and follows the Assad regime’s appalling record of striking such facilities and first responders. These strikes have killed hundreds of innocent Syrians.”

As a reminder, the U.S. isn’t innocent of horrendous events such as this, as just last October the U.S. repeatedly bombed a compound run by the humanitarian organization Doctors Without Borders, killing at least 30 people.

Here is the raw footage of the bombing last week via ABC news. In the final seconds of the video, a person emerges carrying what appears to be a baby, driving home the realities of what can happen when nations meddle in others affairs.