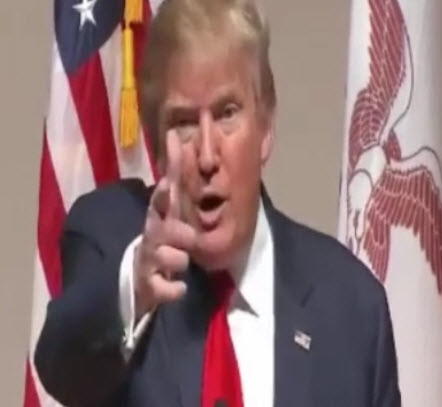 – Trump’s Take On Close Encounters With Russian Fighter Jets: “At A Certain Point You Gotta Shoot”:

Now that there have been at least four documented close encounters between Russian fight jets and US ships and/or spy planes (including two barrel rolls) in the past two weeks, each of which has taken place in the immediate vicinity of Russia’s borders (or above Russian naval bases), there have been two recurring questions: i) why does the US continue provoking Russia with its “fly-by” attempts, well aware what the Russian response would be and ii) if one simply ignores who was the instigator, why has Obama not contacted Putin to at least express indignation at these interceptions.

Today, Donald Trump was interviewed by Indiana radio show host Charly Butcher, and addressed if not the first point then the second one. Commenting on the Friday barrell roll incident, Trump focused on Obama’s diplomatic shortcomings and said that the president should have first called Putin to object.

“Normally, Obama, let’s say a president, because you want to make at least a call or two, but normally Obama would call up Putin and say, ‘Listen, do us a favor, don’t do that, get that maniac, just stop it.’ But we don’t have that kind of a president. He’s gonna be out playing golf or something,” Trump said.

Having bashed Obama, Trump then went on to say that, if diplomacy didn’t work, the U.S. should open fire.

“I don’t know, at a certain point, you can’t take it,” the businessman continued. “I mean, at a certain point, you have to do something that, you just can’t take that. That is not right. It’s against all, you know, when you talk about Geneva convention, there’s gotta be things that are against it. You can’t do that. That’s called taunting. But it should certainly start with diplomacy and it should start quickly with a phone call to Putin, wouldn’t you think?”

We are confident that if Trump had been aware that these “encounters” in which the “maniac” was in fact responding to US “taunts” took place either on top of Russian territory or in its immediate vicinity, he may have reassessed his conclusion that the Russian defensive response is a lack of respect; in fact one can make the argument that the lack of respect is shown by the provocative intruder seeking precisely the kind of outcome that Trump is suggesting.

On the other hand, we are confident that since Putin appears to have a far better dialog with Trump than Obama, and at least some trace of respect, World War III will be avoided, especially since Trump’s entire angle with this exchange was to once again disparage Obama’s foreign policy, not that it is necessary at this point.

As for Putin losing any sleep over Trump’s suggestion, we doubt it. After all the Russian defense ministry had a very simple solution how to avoid such future confrontations:

“The US Air Force has two solutions: either not to fly near our borders or to turn the transponder on for identification.“

Assuming a rational US president who is not a raving neo-con in a liberal Nobel peace prize winner’s clothing, it stands to reason that the two suggestions will be followed.