Less than two years ago, the US set up another puppet government in the mid-east this time in the state of Iraq when following substantial US pressure, on August 14, 2014 then prime minister al-Maliki agreed to stepped down and be replaced with Haider al-Abadi. Today, the regime is in chaos and the system set up in Iraq by the US is collapsing when protesters loyal to popular Shiite cleric Muqtada al-Sadr breached the heavily fortified Green Zone, home to government buildings and foreign embassies, and stormed the Iraqi parliament forcing MPs to flee and unleashing a state of emergency for all of Baghdad.

As can be seen in the photo (and live webcast below), hundreds of demonstrators occupied the country’s parliament. Video from inside the building showed jubilant crowds waving Iraqi flags and shouting “peaceful, peaceful.” Supporters of Sadr, whose fighters once controlled swaths of Baghdad and helped defend the capital from ISIS, have been demonstrating for weeks at the gates of the Green Zone, responding to their leader’s call to pressure the government to reform. 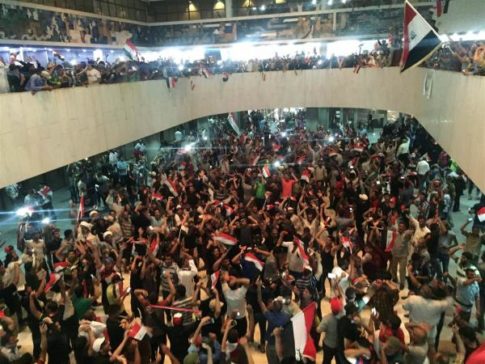 Cited by NBC, Brig. Gen. Saad Mann, a spokesman for the Iraqi military, said that Iraq security authorities have declared a state of emergency in Baghdad. “All gates that lead to Baghdad are closed. No one is allowed to enter into Baghdad, only those who want to leave Baghdad can do so.” “There is no evacuation for the American staff inside the American embassy,” he said. A U.S. official who spoke on condition of anonymity said the American Embassy in Baghdad was not being evacuated, contrary to local reports. We expect that should the pro-US government fall, this will promptly change.

Security forces responsible for guarding the entrance to the area were not able to stop the demonstrators without opening fire so they let them in, the security source told NBC News. As a result, the protest is mostly peaceful for now even thought Saturday was the first time the protesters breached the compound’s walls.

Iraqis are checking into the Council of Representatives on #Facebook. #Baghdad #Iraq pic.twitter.com/z926EEA28O

According to Reuters, the protesters, who had gathered outside the heavily fortified district housing government buildings and many foreign embassies, crossed a bridge over the Tigris River chanting: “The cowards ran away!” in apparent reference to departing lawmakers.

There were no reports of clashes with security forces. But an army special forces unit was dispatched with armored vehicles to protect sensitive sites, two security officials said. No curfew has been imposed, they said.

Moments before the Green Zone breach, Sadr seemed to offer an ultimatum: “Either corrupt (officials) and quotas remain or the entire government will be brought down and no one will be exempt from that.” In a televised speech from the holy city of Najaf announcing a two-month withdrawal from public life, Sadr said he was “waiting for the great popular uprising and the major revolution to stop the march of the corrupt.”

Abadi has warned that delays to overhauling the cabinet could hamper the war against Islamic State, which controls vast swathes of northern and western Iraq. Considering the massive boost in US “troops on the ground” in Iraq in recent months, surely the US can take care of this perpetual “scapegoat” on its own.

A live webcast form the scene of the Iraqi parliament can be seen after the jump. 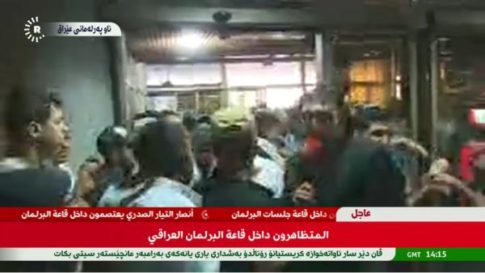