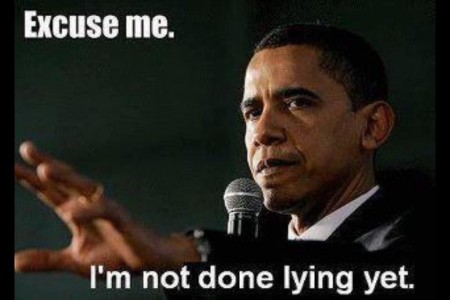 – Obama Admin Denies Saying “No Boots on the Ground” in Syria After Saying It 16 Times:

United States — What does a government do when it’s caught in a flagrant lie? If you are the U.S. government, you simply tell another lie — and laugh at anyone who tries to call out your hypocrisy.

Setting aside his oft-parroted no-boots-on-the-ground imperative, President Obama announced Monday the U.S. would be quintupling the number of special forces troops deployed to Syria to fight Daesh (the so-called Islamic State). In fact, the announcement was made later on the same day Obama claimed to have “ruled out” the deployment of ground troops.

Though this reneging on stated foreign policy has become somewhat par for the course, State Department spokesman John Kirby not only missed the hypocritical move, he flatly and bafflingly denied the Obama administration’s repeated claim there would be “no boots on the ground.”

In fact, instead of taking responsibility for initiating military maneuvers the public might find displeasing, the Obama administration has developed an apparent affinity for nitpicking semantics.

In a press conference, this farcical denial of reality reached stupefying proportions when Kirby was asked by an Associated Press reporter about this stark reversal of policy. All emphasis has been added to highlight the absurdities.

“I’m just curious if this is, like, part of some kind of devious grand strategy to say one thing and then do the complete opposite of it,” the reporter queried.

“I just — I don’t see it that way,” Kirby responded. “There was never this ‘no boots on the ground.’ I don’t know where this keeps coming from.”

Pressing the point, the reporter expounded, “For months and months and months, the mantra — from the President and … everyone else in the Administration — has been ‘no boots on the ground,’ and now —”

“That is not true,” Kirby interrupted.

“What?!” the reporter exclaimed — apparently as baffled as the rest of the press, heard murmuring in similar disbelief around the room.

Of course, it is true — and Kirby’s semantic gymnastics to justify such a brazen lie added an Orwellian twist to the already Kafkaesque press conference. And that truth is written in black and white — even on the White House website, at least as far back as August 2013, when Obama stated:

“After careful deliberation, I have decided that the United States should take military action against Syrian regime targets … We would not put boots on the ground.”

“First, many of you have asked, won’t this put us on a slippery slope to another war?

“My answer is simple: I will not put American boots on the ground in Syria.”

“[The U.S. involvement in Syria] does not involve boots on the ground.”

September 9, 2013, brought the same statement from the president, in an interview with PBS Newshour:

“Tomorrow, I’ll speak to the American people. I’ll explain this is not Iraq; this is not Afghanistan; this is not even Libya. We’re talking about — not boots on the ground.”

Again, Obama repeated on September 7, 2014, as the Intercept noted:

“In Syria, the boots on the ground have to be Syrian.”

Though after the last statement, Obama’s characterization of ‘no boots on the ground’ began a subtle shift in language — evidencing mission creep — he sustained the narrative troops would not be deployed on the ground.

“The resolution we’ve submitted today does not call for the deployment of U.S. ground combat forces to Iraq or Syria.”

It’s arguable the United States populace could handle an honest statement outlining policy many may not agree with — such as the deployment of boots on the ground — if the plan were forthrightly presented.

But for Obama and other officials to repeatedly claim as much, and to then have the State Department act as if the people, themselves, have collectively lost their minds when pointing out the mendacious gaffe, is downright laughable — if not profoundly insulting.

It has become clear the United States mission to fight Daesh — with the secondary goal to oust Syrian President Bashar al-Assad — will involve boots on the ground. But it’s questionable whether the Obama administration with ever manage to admit to as much.