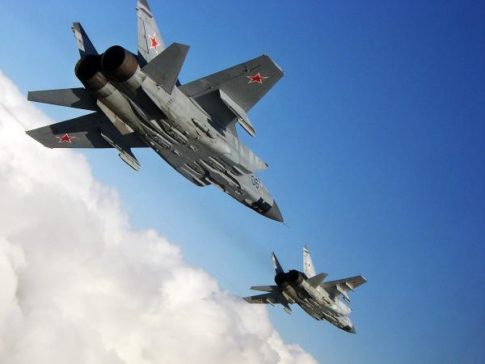 – Russian Fighter Jet Flies Within 50 Feet Of US Spy Plane Over Russian Naval Base:

Tensions continue to escalate between the US and Russia. As a reminder, Russia conducted several close encounter fly-bys when first a Russian Su-24 “buzzed” the US missile destroyer USS Donald Cook in the Baltic Sea, and just days later flew within 50 feet of a US recon plane also flying over the Baltic Sea. The U.S. quickly responded and complained vocally to Russia, followed quickly by the first deployment of US F-22 stealth fighter to Romania, in close proximity to both the Black Sea and 400 km from the Russian military stronghold of Sevastopol on the Crimean Peninsula.

It now appears there was a third incident involving an extremely close encounter. According to the Free Beacon, a Russian MiG-31 jet flew within 50 feet of a U.S. surveillance aircraft in Northeast Asia last week, in what was dubbed “Moscow’s latest aerial saber-rattling” against American ships and planes by US defense officials.

“On April 21, a U.S. Navy P-8 Maritime Patrol reconnaissance aircraft flying a routine mission in international airspace was intercepted by a MiG-31 Russian jet in the vicinity of the Kamchatka Peninsula,” Cmdr. Dave Benham, a spokesman for the Pacific Command, told the Washington Free Beacon. While Benham added that the intercept was “characterized as safe and professional” there was more to the story as another defense official familiar with the MiG-31 intercept said the jet flew within 50 feet of the P-8, a maritime patrol and anti-submarine warfare aircraft.The WFB adds that the incident took place near the Russian city of Petropavlovsk-Kamchatsky, a port located on the southeastern end of the peninsula, which explains why Russia may not have been particularly enthused with a US spy plane flying virtually on top of its territory.

Kamchatka is Russia’s main military hub in the Pacific and the focus of a buildup of Russian military forces that Moscow has said is intended to match the U.S. military rebalance to Asia. Several military bases are located there, along with a major naval base. The peninsula is also the main impact range for Russian missile flight tests launched from the central part of the country.

Worse, the P-8 flight appears to have been part of an effort to spy on Russia’s deployment of a new missile submarine at Petropavlovsk, and since clearly the US was fully aware that Russia would respond unfavorably to this encroachment one wonders if the US wasn’t merely acting to provoke its Russian counterparts into something more than merely a “safe and professional” response.

The Russian navy’s Pacific Fleet conducted exercises in the Sea of Japan on April 22, a day after the P-8 was intercepted, according to a Twitter search. Russian naval forces from Kamchatka also carried out missile and artillery fire exercises in recent days. The WFB adds that the military activities may have also been a target of the P-8 surveillance operations.

In other words, the US was deploying spy planes in the immediate vicinity if not over Russian territory and was surprised when Russian engaged with an appropriate response. One wonders just how the US would react if Russian spyplanes were flying in the vicinity of Norfolk or San Diego.

Meanwhile the farce continued: on Capitol Hill, Defense Secretary Ash Carter told a Senate hearing on Wednesday that the recent incidents are an indicator of “tension that has built up in Europe especially over the last couple of years since events in Crimea and Ukraine.” Incident such as US spyplanes flying over critical Russian bases and being surprised by the reaction.

Indeed: and the next time Carter wants it to certainly “lead somewhere”, he should send not one spy plane but several F-22 on a routine fly by in the same area only to be surprised by the Russian reaction.

Meanwhile, as the US builds up its ballistic missile arsenal and attack subs, it will just have to make do with more such incursions in close proximity to Russia and be amazed at the “provocative” response.