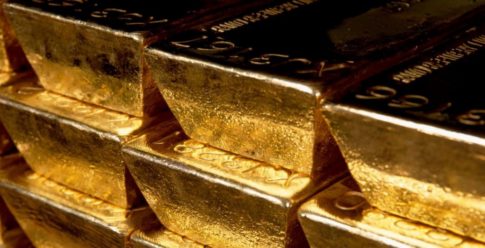 Stacks of gold bars are arranged on shelves in the Bank of England’s vaults (Credit: David Levenson/Alamy)

– Gold In Vaults Beneath Bank of England Worth $248 Billion?:

The gold bullion or “hidden gold mine” of various nation’s gold reserves stored in the vaults beneath the Bank of England have been covered by the BBC:

Under London’s streets lies a hidden gold mine.

It stretches across more than 300,000 square feet under the City, the finance quarter in the heart of Britain’s capital. There, beneath the pavement and commuters of Threadneedle Street, lies a maze of eight Bank of England gold vaults – each stacked with gold bars worth a total sum of around £141 billion ($200 billion).

The bars sit on rows of blue numbered shelves. Every bar weighs precisely 400 troy ounces (about 12kg), making each currently worth some £350,000 ($500,000), comfortably more than the average price of a house in the UK. Each bar looks subtly different depending on where it was refined. Some bars have sloping edges to make them easier to pick up; others look more like a loaf of bread.

There is no smell here: metal has none. There is no noise, either, on account of the vaults’ thick concrete walls.

What there is, however, is one of the world’s most important traded assets. Deals are still done in gold in almost every country in the world. Its price is a crucial barometer for consumer confidence. Prices rise when markets are uncertain, and before US elections – like now.