– “Battle For The East” Is Over: Trump Sweeps All 5 Primaries; Clinton Takes MD, DE:

As we detailed earlier, Ted Cruz got his pre-concession speech in early this evening, just before the polls closed at 8pmET, jabbing at Trump being “Hillary’s running mate” and “the only candidate that Hillary could beat.” Ironically, Cruz blamed the media for getting excited about Trump’s victories tonight…

But the rant rang dull as his speech was rudely interrupted by the actual results. As expected Donald Trump took Connecticut, Maryland, and Pennsylvania, with Rhode Island and Delware too early to call for now. NBC also projects Hillary to win Maryland. As Goldman warns the rest of the fields: “There isn’t that much left on the table between today’s contests and June 7.”

Of course the next crucial thing to watch is whether Trump can take 50% (and hence the bulk of the delegates).

Before the results started to roll in, this is where they stood… 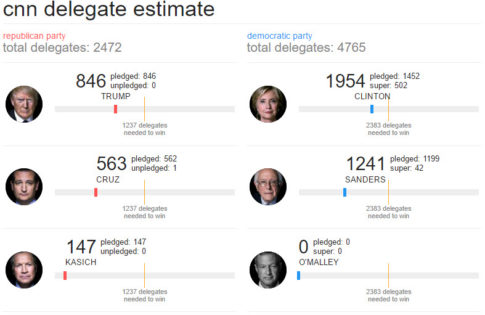 Finally, here is Goldman summarizing the situation from here…

After a brief period of uncertainty following the Wisconsin primary earlier this month, the Republican nomination once again looks like it is Mr. Trump’s to lose, while Sec. Clinton appears to have a tight grip on her party’s nomination and could clinch it outright (including “superdelegates” in the total) before the last of the contests in June.

Trump looks very likely to win all five states; the main uncertainty at this point is whether he will win sufficient delegates to put him on track to clinch a majority of delegates prior to the Republican convention that starts July 18. Connecticut, Delaware, Maryland, Pennsylvania, and Rhode Island go to the polls, with 118 Republican delegates at stake. Our expectation, based on polling in the states and each state’s primary rules, is that Mr. Trump is likely to win slightly less than 100 of the delegates in play.

Coordination between Gov. Kasich and Sen. Cruz might make a difference in Indiana, though Mr. Trump still looks like the narrow favorite there. Sen. Cruz and Gov. Kasich appear to be coordinating their campaign strategies, with Gov. Kasich shifting resources out of Indiana, and Sen. Cruz suggesting he will not focus on New Mexico or Oregon. The contest in Indiana does indeed look close — Mr. Trump leads Sen. Cruz by an average of 39% to 33% in an average of the only three polls in the state, conducted last week; Gov. Kasich is farther behind at around 19%. If enough support shifts to Sen. Cruz, it is possible that he could take the 30 delegates that Indiana will award to the statewide winner, plus a fraction of the additional 27 delegates split among the winners of the 9 congressional districts. However, “strategic voting” seems unreliable. When Sen. Rubio attempted something similar in urging his Ohio supporters to vote for Gov. Kasich, his actual vote share came in 4pp below his prior level of support, or a decline of slightly more than half. But the political and ideological differences between Sen. Cruz and Gov. Kasich are much greater than between Sen. Rubio and Gov. Kasich. Moreover, while the intent of the strategy seems clear enough, Gov. Kasich stopped short of actually instructing supporters to vote for Sen. Cruz.

Whatever the outcome in Indiana next week (May 3), Oregon and New Mexico will probably be less consequential. Although Sen. Cruz has suggested he will shift resources out of Oregon (May 17) and New Mexico (June 7), it might not make that much of a difference. These are among the few states left that allocate their delegates in proportion to the statewide result, so even if Gov. Kasich were to deny Mr. Trump a win in either state, it probably would make only a small dent in the delegate count.

There isn’t that much left on the table between today’s contests and June 7. A few other states vote in May, but these contests look unlikely to change the outlook significantly. Nebraska (May 10), Montana, and South Dakota (both June 7) look likely to award Sen. Cruz all of their combined 92 delegates. New Jersey (June 7) awards all of its 51 delegates to the statewide winner, and Mr. Trump seems to have a sizeable advantage there. West Virginia (May 10) has an unusual system that looks likely to award a substantial share of delegates to Trump while possibly also producing some unbound delegates. Washington State (May 27) is a bit of a mystery at this stage due to a lack of polls; it awards its statewide delegates proportionally so it might make slightly less of a difference in the delegate math in any case. Overall, we expect that Trump will win around half of the 199 delegates up for grabs in May, suggesting that the risks are fairly evenly balanced in next month’s contests.

The outlook in California (June 7) will quickly become a focus. Polling since the start of the month in California shows Mr. Trump averaging 46% support, well above Sen. Cruz’s 25% and Gov. Kasich’s 19%. However, while California awards 3 delegates to the winner of each congressional district (159 in total) like several other states, it awards a disproportionately small number to the statewide winner (13 delegates, which is the same number Rhode Island awards to the statewide winner, for example). This is important because even if Trump wins the majority in the state as a whole, he is apt to lose delegates to Gov. Kasich and Sen. Cruz in some congressional districts. We assume that he will win around 100 of the 172 California delegates in our illustrative delegate count (Exhibit 1) but there is obviously a good deal of uncertainty in these later races. 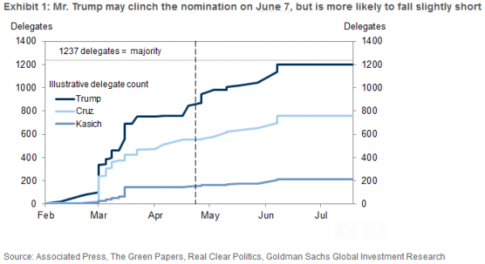 The outcome of the Republican nomination looks unlikely to become clear until the convention. If Trump fails to win 1237 delegates in the contests through June 7, his remaining option to secure the nomination would be to win the support of unbound delegates before or even during the convention, which starts July 18. Under the hypothetical delegate scenario illustrated in Exhibit 1 where Trump wins around 1200 of the delegates but falls short of a majority, he would need to work to gain the support of another 37 or more unbound delegates, out of around 150 total. However, a number of these delegates have already announced their support for other candidates (e.g., Sen. Cruz), leaving a smaller pool for Trump to draw from. The primary results in Pennsylvania could shed some light on this question; Pennsylvania will send 54 unbound delegates to the convention—the largest amount from any single state—and some Pennsylvania delegates have suggested they might feel obliged to support their state’s winner (though others have already announced support for a candidate regardless of the results). We would expect to see additional scrutiny of these delegates’ intentions in coming days.