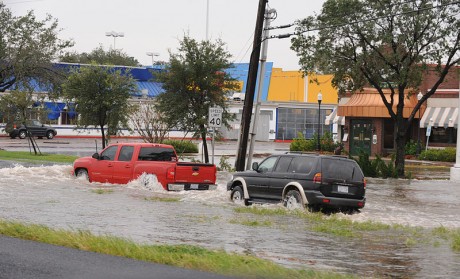 – Houston Flooding Is The 8th Historic Flood To Hit America Since The End Of September:

Why has the United States been hit by historic flood after historic flood in recent months?  The flooding that is pummeling the city of Houston is the 8th historic flood in this country since the end of September.  City officials down in Houston have labeled the flooding that is currently slamming the city “a life-threatening emergency“, and they are insisting that “Houston residents should avoid travel at all costs today.”  At this point, dozens of subdivisions have been flooded and major sections of Interstate 10 and Interstate 45 are under water near downtown.  Authorities are telling us that water is getting to areas that it has never been before, and Fire Department spokesman Jay Evans announced that the water is already 10 to 15 feet deep in some areas.  But even though some parts of Houston have already gotten close to 20 inches of rain within the last 24 hours, there is more rain in the forecast, so this crisis is far from over.

The giant storm that has caused all of this rain was a complete surprise to many residents of Houston.  A lot of people woke up on Monday morning to discover that their neighborhoods now resembled Waterworld.  The following comes from the Chicago Tribune…

More than a foot of rain fell Monday in parts of Houston, submerging scores of subdivisions and several major interstate highways, forcing the closure of schools and knocking out power to thousands of residents who were urged to shelter in place.

Sylvester Turner, mayor of the nation’s fourth-largest city, told residents to stay home to fend off a weather system he called “stubborn.” More rain was projected over the next two to three days although heavy downpours had subsided somewhat by midday and only another half-inch was expected through Monday night, he said.

If this flooding was just an isolated incident, it wouldn’t really be that big of a deal.

But the truth is that this flooding in Houston continues a very disturbing pattern that began in early October of last year.

Since the end of September, the U.S. has been hit by 8 historic floods, which works out to an average of more than one a month.  For this article, I wanted to update a list of these historic floods that I started in a previous article…

October: Hurricane Joaquin never makes landfall, but it tracks up the east coast of the United States causing nightmarish rainfall and flooding all over the eastern seaboard.  Things were particularly bad in South Carolina, where the governor declared that it was the worst rainfall that many areas of her state had seen in 1,000 years.

October: Violent storms in southern California caused flash flooding that buried some highways in “rivers of mud” that were up to six feet deep.  Hundreds of vehicles got buried in the fast moving mud, and the lifeless body of one man that had his vehicle completely encased by several feet of mud was recovered only after a few days had passed because that is how long it took emergency workers to dig him out.

October: Hurricane Patricia was the second most intense tropical cyclone ever recorded in the entire world, and remnants from that storm caused absolutely horrible flooding in some parts of Texas.  The flood waters were moving so fast at one point that a freight train was actually knocked entirely off the tracks.

November-December: A “conveyor belt” of violent storms barreled into coastal areas of Oregon and Washington causing nightmarish flooding in many areas.  The resulting landslides and floods made headlines all over the country, and it is going to be a long time before the region fully recovers.  In early December we witnessed the wettest day in the history of Portland, Oregon, and things were also extremely bad at that time up in the Seattle area.

January: The middle part of the country experienced record-breaking flooding as the calendar rolled over from 2015 to 2016.  The only thing that people could really compare it to was the great flood of 1993, and Missouri Governor Jay Nixon said that some communities saw floodwaters get to “places they’ve never been before”.  Normally, if the middle of the country is going to see flooding like this it is going to take place when the snow begins to thaw in the spring.  For something like this to happen in the middle of the winter was absolutely unprecedented.

January: On January 22nd, one of the worst east coast blizzards in history slammed into Washington D.C., New York City and other major metropolitan areas.  More than three feet of snow was dumped on some areas, hundreds of thousands of people were left without power, and coastal cities all long the eastern seaboard experienced flooding that was described as “worse than Hurricane Sandy“.  It is also interesting to note that this storm was known as “Jonas”, which is actually a Greek transliteration of the Hebrew name “Jonah”.  Jonah, of course, was a Hebrew prophet that was sent to the capital city of Assyria (Ninevah) to warn that the judgment of God was coming.  Well, it turns out that this storm called Jonas also hit our capital city (Washington D.C.) on the exact anniversary of Roe v. Wade and in the exact location where Roe v. Wade was decided.

March: Almost two feet of rain triggered historic flooding in parts of Texas, Louisiana and Mississippi.  Flooding along one area of the Sabine River broke the previous record by more than five feet, and some sections of Interstate 10 were closed for four days.

Never before has the United States experienced so many historic floods in such a compressed period of time.

Some believe that “climate change” is responsible for these bizarre weather patterns, others are pointing the finger at El Nino, and yet others believe that this is a sign that we are approaching “the last days” described in the Bible.

What everybody should be able to agree on is that what we are witnessing is highly, highly unusual.

Historic floods have hit almost every region of the country since the end of September, and the economic damage that has been caused has been immense.

Hopefully we will get a break from all of this flooding soon, but I wouldn’t count on it.